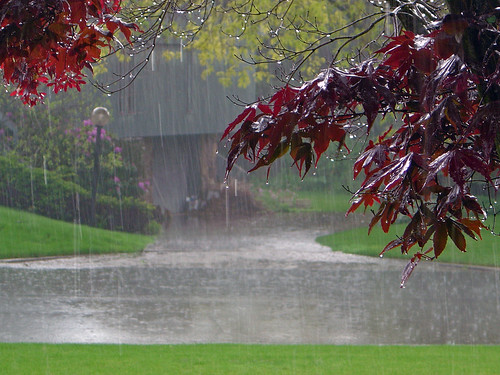 Some may sing in the rain. I run in the rain. Not usually by choice though and with far less coordination and skill than Gene Kelly can sing or dance, but I do it out of necessity. And, it’s been kind of refreshing.

For the last few weeks, the weather in the Midwest has been more Sleepless in Seattle than Little House on the Prairie. And darn near every day after work I have come home to drizzle, sprinkles or downright cats and dogs. I love my exercise DVDs, but a Fit Bottomed Girl can only take so much indoor time. And my pup is going a littler stir crazy, too. After almost a week straight of soppy weather, the furry beast needed a good run as much as I did. Not to mention that she’d chewed the antenna off of my cordless phone and kept eyeing my black flats as her next victims.
After a particularly long and exasperating day at work, I decided to hell with it. I’m going running. I need to run. A quick check of the weather showed that no thunderstorms were in the vicinity, just a nice steady rain. So after a quick change into my scrubbier workout clothes (no need to look cute in the rain, after all), I grabbed the leash, the dog and my iPod Shuffle, and we were off. Right out of the gates, we got a few weird looks from people. I even had a lady in her car stop and offer us a ride home. “Um, no thanks. We’re just out running…in the rain.” Confused, she pulled away.
But honestly, the experience was kind of liberating. I felt like a bad ass for not letting a little water get in the way of my workout, and the rain was so cool and such a nice change from my sweat-drenched summer runs. I couldn’t tell what was sweat and what was rain on my face. I even had to pick up my pace because the dog, a little freaked out, kept sprinting, trying to get us to shelter, I imagine. Eventually though, she enjoyed it, too, even snapping at the raindrops occasionally to get a drink. (Dogs are great, eh?)
By the end of the run, I was sopping and probably smelled as bad as my dog, but I felt refreshed and a little renewed in the spirit department. Corny as it sounds, I felt more in touch with myself and Mother Nature. Not to mention that it felt freeing to be out when everyone else was dry and warm in their cars or battened-down houses. The streets were pretty much empty except for us, and, much to my pleasure, the squirrels were hunkered down, too, thereby preventing my pup from pulling my arm out of its socket in attempts to catch a furry snack.
In fact, I liked running in the rain so much that I decided to do it twice more the next week when a giant rain-filled system took up temporary residence over the Midwest again. Nowadays, when the rain clouds are a comin‘, I’m not heading to the gym. I’m hitting the streets with my four-legged friend. Eat your heart out, Gene Kelly. —Jenn
Photo grabbed from http://www.flickr.com/photos/laffy4k/155406169/.
New Fitness
New Mamas
New Eats
New Zen
STAY IN THE KNOW
When new stuff happens, you'll be the first to know!
Just for You
Drop the diet for good
A variety of anti-diet coaching programs just for you.
Get free access
STAY IN THE KNOW
When new stuff happens, you'll be the first to know!
About Us
Jenn and Kristen are passionate about letting women know they're more than a number on the scale.
Get the deets
Instagram
No images found!
Try some other hashtag or username
X