The challenge of a lifetime, post-workout munchies and your best breakfast bet.

Heard of the 50 Million Pound Challenge yet? Well, if you have, you know that it’s a free national health initiative rallying Americans to come together and “Give up the pounds, not the fight.” So far, more than 700,000 people have joined the challenge, bringing the total pounds lost over the 3 million mark. The challenge is targeted primarily to African Americans but is open to anyone. If this is your first time hearing about the program and you still don’t know what it is, I suggest you reread this paragraph.

The Challenge was created by Dr. Ian Smith and sponsored by State Farm. Although Dr. Ian may be best known for having to endure Screech on Celebrity Fit Club, this truly seems to be his passion. Plus, having the nation lose 50 million pounds is way bad-ass.

To Eat or Not to Eat
For ages we’ve been told that you should fuel up after a workout—preferably with some carbs and protein, especially if you’ve been lifting. I, for one, usually nosh a quick 100-calorie mini Clif bar after a run, whether I’m hungry or not, as I’ve been trained to.

That was then. This is now. New research shows that while athletes benefit from a post-exercise snack, us common folks (read: those who work outless than four hours a day) don’t need to. In fact, eating right after a non-marathon workout can diminish some of the benefits of exercise. The findings of three studies appeared in the Journal of Applied Physiology, Nutrition and Metabolism and the Journal of Applied Physiology. Click the link below to read more. It’s pretty fascinating, and it’ll probably cause me to stop eating right after my sweat sessions. Unless I’m really hungry that is. You need to feed the beast when it demands it.

That is the question. 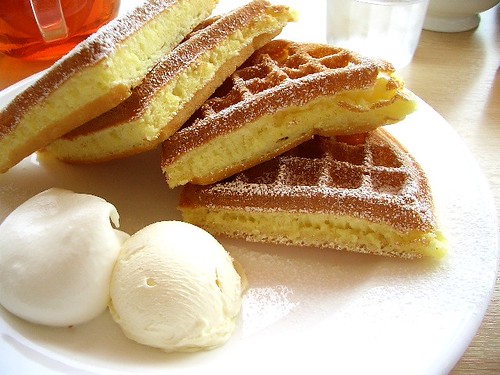 Breakfast may be the most important meal of the day, but not any b-fast meal will do. While a new study does show that breakfast eaters average fewer calories a day than people who skip breakfast and women who eat breakfast have a lower average BMI than women who don’t eat breakfast, the study also shows that as breakfast calories increase, so do calories and fat for the entire day. Darn. No more hash browns and waffles at IHOP with the excuse of “it’s for my health.”

Oh, and none of this research applies to men, as there was no difference in BMI among men who did or didn’t eat breakfast. Lucky bastards. The study appears in the November edition of The American Journal of Clinical Nutrition. And just to be clear, researchers still recommend eating breakfast, just a lower-calorie option to the traditional fare at IHOP.

Bonus Bit: The Biggest Loser Finale Is On
Don’t forget that tonight at 8 p.m. Eastern is the finale of The Biggest Loser! I know I’ll be tuned in to see the winner, get inspired and drool over Bob. Not to mention to see how the whole Heba/Ed thing goes down. What about you? Will you watch? Did you vote?

Your BL two-minute replay. (Note the ad for the 50 Million Pound Challenge, which was mentioned above—talk about solid cross marketing!)

For more interesting tidbits, read about Jessica Simpson’s “functional” beer and how hunger might make you happy (that’s totally not true in our experience, but, hey, who can argue with science?).

Add a comment Cancel reply
13 Comments
Just for You
Drop the diet for good
A variety of anti-diet coaching programs just for you.
Get free access
STAY IN THE KNOW
When new stuff happens, you'll be the first to know!
About Us
Jenn and Kristen are passionate about letting women know they're more than a number on the scale.
Get the deets
Instagram
X