Vitamin Water gets called out, there are no short cuts to fitness, and caloric restriction just leaves you hungry. 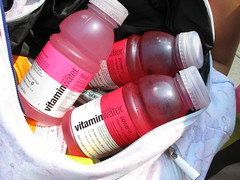 Usually when I want to hydrate, I just drink plain ol’ regular tap water, but occasionally I’ll spring for a bottle of flavored water. I’m such a wild child. Typically, I’ll buy a low-cal one, but with all the marketing, it’s sometimes hard to figure out what’s healthy and what’s not. Turns out, I’m not the only one who has noticed this. The Center for Science in the Public Interest has, too, and they’re pretty ticked. The public interest group recently sued Coca-Cola over the health claims made on its VitaminWater product, saying that the drink is marketed as healthier than soda despite the fact that it contains 33 grams of sugar. Ouch. Sounds like I should stick to the tap.
Always check the nutrition label.

The Long Haul
Bad news to those looking to drop 30 pounds in six weeks. A recent study shows that it takes substantial time—from six months to a year—to really change how you look. The study was spurred after one researcher started looking closer at those before-and-after photos so commonly used on diet ads and books. After photographing subjects before and after six weeks of different types of exercise, results showed that people’s bodies really didn’t change much.

In reality, those people you see featured on the diet ads are the top one or two people out of thousands, one researcher says. But don’t let that get you discouraged. Remember, real change doesn’t happen overnight, but it’s totally worth it!

Slow and steady wins the race. 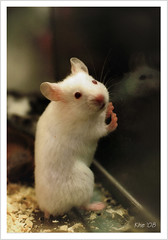 Have you been following any of those studies that say that those who severely limit their food consumption live longer than those who don’t? Well, we have, in quiet annoyance as to how anyone would choose to be cranky and have a constantly growling tummy. I’d personally rather live a shorter and happier life than a longer hungry one, but that’s just me. However, there’s finally some good news from the research world on this! Caloric restricted diets seem to only benefit obese mice.

So, unless you’re a rodent, eat your fair share of healthy foods!

Bonus Bit: More Love, Less Handles
The good folks over at Gold’s Gym have created four workouts to help you and your honey get fit this V-day. So before you enjoy that box of chocolates, try their trust, intimacy, intensity and communication workouts. The workouts also double as a free trial membership to Gold’s, so check it out!

Take it to heart.

Add a comment Cancel reply
11 Comments
Just for You
Drop the diet for good
A variety of anti-diet coaching programs just for you.
Get free access
STAY IN THE KNOW
When new stuff happens, you'll be the first to know!
About Us
Jenn and Kristen are passionate about letting women know they're more than a number on the scale.
Get the deets
Instagram
X