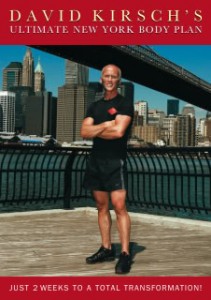 Yesterday we featured a Q&A with celeb trainer David Kirsch. And today, as promised, we’re reviewing his workout DVD The Ultimate New York Body Plan. Before I begin, let me clarify one thing: When David says “ultimate” in his DVD title, he means it. This DVD is no joke, and it’s not for the faint of heart (or the workout novice).

Through a number of customizable workout options, David gets every part of your body burning with a combo of strength, agility, core and cardio moves. Think squats plus overhead raises, a sumo squat combo with sidekick, and push-ups with one leg up that move to side planks. Not. Easy. Some of the more inventive combo moves he calls his “signature moves,” which kind of rubbed me the wrong way because he seemed to be bragging about it, but he does keep Heidi Klum hot, so he has a reason to boast. And, for the record, many of his moves are unique and very effective as I was very, very sore the day the next day.

For the exercises, you use 3- to 5-pound dumbbells (I’d err on the lighter side except for the chest exercises), a medicine ball, a mat, a stability ball and a towel—unless you’re cool with a puddle of sweat in the living room. If you don’t have a medicine ball, you can swap a dumbbell for most of the medicine ball exercises. If you don’t have a stability ball though, you really can’t sub for it, and I wouldn’t even recommend trying to. I’ve never tried a workout DVD that used a ball more effectively and creatively. And it’s not just for abs. David has you on the ball for incline chest presses, hamstring curls, push-ups, planks and more. The stability ball fun never ends.

The DVD includes six workout options. First, David runs you through a 10-minute fitness test that gauges your ability to do some of those “signature moves.” Then, based on how easy or hard the test was, you transition directly to the core program or start with the less intense pre-core program and graduate to the full core program later. The core program is a 45-minute sweat-athon of the most challenging full-body moves, while the pre-core workout is a 15-minute abridged version of the core program. I also found the pre-core program to be a great option when you don’t have a full 45 minutes to work out.

Then, David also gives you a 15-minute upper body and abs section (think lots of shoulders and ab torture on the ball), a 15-minute legs and butt section (think weighted donkey kicks and fire hydrants), and lastly, a 5-minute stretching cool down. The core program is definitely the most challenging section on the DVD, but the shorter sections aren’t cake.

What is nice is that even though you have light weights, David rarely has you do more than 10-20 reps of any exercise, and most are closer to 10-12. This fact greatly helped me to push myself, as I knew there were just a few reps left. Also, David does A TON of different exercises in all of the sections, so someone with exercise ADD (ahem, myself) stays engaged.

The set of the DVD is pretty cool. David and his two homies kick it outside with New York City in the background. The production quality is a little on the low-budget side because you occasionally hear the wind blowing, and the music isn’t anything to write home about, but it’s not unforgivable. (It’s only really terrible in the DVD’s intro, which is worth checking out because it’s so cheesy and very SNL-like.)

David himself is quite the character, too. He’s very intense, and although in spots I think he’s joking about “sexifying” your muscles, I’m not sure because in the next sentence he’s telling you about how wonderfully “sinewy” your muscles will be. And that’s just weird. He also strongly resembles Christopher Walken. Only with more muscle.

At times his cuing is spot-on, and at times it’s totally absent. He rarely shows modifications for exercises, including when he does clapping push-ups, which really turned me off. I did two of them and then modified to basic push-ups on my knees. However, David is full of words of encouragement and makes sure to tell you a number of times that working out isn’t just about “sexifying,” it’s about self-empowerment, which I dig.

Fit Bottom line: For regular exercisers who want an advanced challenge (and don’t mind working out with Christopher Walken as their trainer), this is a DVD that you won’t get bored with. And it just might give you sinewy muscles. Oh, the hotness. —Jenn

Want to try this yourself and live in the U.S.? Enter to win a copy of this workout DVD by commenting below or emailing us at contact@fitbottomedgirls.com by next Thursday. (If you’re dying to try it and not ready to chance not winning it or not, buy it on Amazon for cheap.)