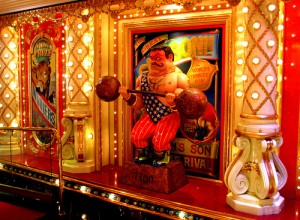 It’s no secret that Jenn and I are regular exercisers. I mean, our site is about fitness. I’m no stranger to running or hopping on the elliptical or using my dumbbells and DVDs to get a good workout. So even before I started on my Equinox training endeavor, I had a pretty solid level of fitness. I could run without keeling over and do workout DVDs with the best of them.

But I would moan and complain to my husband that I wasn’t seeing the results I wanted to see and ask why my arms didn’t look more buff. And he would tell me that I wasn’t working hard enough. I scoffed at the notion that I wasn’t working hard enough. I thought it was a typical guy thing to say because he can do 10 times as many push-ups as I can, with minimal training and with an arm practically tied behind his back. After all, I knew that some of the DVDs I did were tough. I knew that running a few miles was, quite literally, no walk in the park.

I haven’t been working hard enough.

As I’ve detailed, I push myself (and get pushed) really hard in my training sessions with Jayme. And within just a few weeks, I started seeing a difference. About six sessions in, I found that I could give my workout my all and not feel like I was going to die the rest of the day. After just a few weeks, I had energy to spare. I started seeing more definition in my arms. I noticed I could run three miles easily—and quickly—with no breaks. I found that maybe I didn’t need that day off after all; that maybe I could still get in some cardio while giving my arms a break from lifting.

I’ll admit that at first, when Jayme would suggest a run after one of our sessions or a cardio class on my days off from training, I thought she was slightly insane. But because I’m a good trainee and good student, I did as told. With a little guidance, it finally sunk in that I had way more energy to burn than I’d ever thought. That I didn’t need two (or three) days off when I was feeling sore. That I wasn’t getting in nearly enough cardio. And let me tell you: I felt more than a little triumphant when the hubby and I went on a run recently and I was the one setting the pace for a change. Looks like he’ll have to work a little harder to keep up. —Erin