“Pee envy” to be precise. If you’ve ever been on a camping trip with a dude or really any place where a bathroom wasn’t readily accessible and you had to GO, you know what I’m talking about. Men clearly have an advantage when it comes to urinating. It’s really not fair. 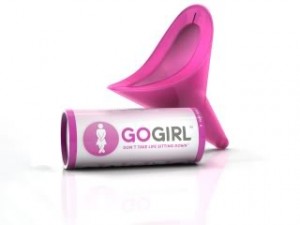 Well, kinda. After the manufacturer sent a GoGirl for Erin and I to try (we each got our own, for the record), I was excited. After all, I was going to use this cute pink funnel to pee standing up. STANDING UP, I say! I decided to try it during my previously written about camping adventure (featuring the Honey Locust’s 3-inch thorn), as I’m really, really jealous that my husband gets to pee in the woods while I hover behind a bush, hoping no person or creature walks by.

In theory, the GoGirl is great, and I did get to pee standing up (an interestingly androgynous experience—I subconsciously even pushed my hips out like guys do!), but because of our, ahem, anatomy, it’s pretty impossible to position the funnel so that you don’t have to take your shorts off. So the whole nudity thing is still there. BUT, you don’t have to squat. And as long as you can control your flow (if you pee pretty ferociously the funnel will back up, which is pretty much the opposite of what you’re going for), you’re golden.

Because Erin had no camping trip to go on, she tried the GoGirl in the privacy of her own home. Her email report? “I just GoGirled all over myself.” I asked if she was not able to control the flow, to which she responded that a failure to “seal” it properly to her body gave her a dual-flow problem. Once the seal was taken care of—and once she was able to relax—she gave the GoGirl her “seal” of approval, pun fully intended. So while it’s no perfect solution and you have to get the hang of it, it is kinda fun. Well, as much fun as peeing can be.

The funnel can even be reused if you wash it (obviously), or you can pitch it after use. The container it comes in is very discreet. And did I mention that it’s cute? While I don’t think I’ll be carrying around a lifetime supply of these, I can definitely see how it would be useful for outdoor sports activities, traveling or concerts. You know, the places with the grossest of gross portable potties.

And, again, there’s the novelty of PEEING STANDING UP. Gender-peeing equality at last! —Jenn