Train your brain, U.S. life expectancy increases, and excessive exercise may be addictive. 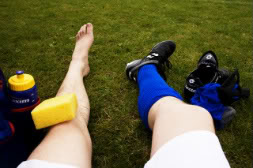 Injury Prevention
Thankfully I’ve never torn my ACL, but I’ve known a few people who have, and let me tell you, it’s not a knee problem I’d wish on my worst enemy. Seeing as how the anterior cruciate ligament is pretty crucial to your knee, it’s best to prevent it getting buggered up.

New research is now showing that training your brain might be just as effective as training muscles when it comes to preventing these knee injuries. A study showed that when one leg was fatigued, both legs—even the fresh one—showed problematic responses, indicating that the brain is getting tuckered out, too. When your muscles get tired, you may be less likely to react quickly and safely in any given athletic situation. So be careful and consider taking a break when you start getting worn out. Your knees will thank you!

Aging Americans
I was actually quite surprised at this—what with the rates of obesity and all of the negative news you hear—but life expectancy for Americans has increased. Woo hoo! Try not to get crazy excited though: Life expectancy increased by two-and-a-half months. Still, it’s better than nothing. In 2007, the life expectancy was 78 years, up from 77.7 in 2006. That’s all well and good, but this is my favorite part: Not only is lifespan on the rise, but the active lifespan is increasing. Good for all of those Fit Bottomed Seniors out there!

Like a Drug
I know a lot of exercisers who swear their workouts are addictive, and now the studies back them up. New research says that extreme exercise may be physically addicting. Get this business: Rats given a drug that produces withdrawal in heroin addicts went into withdrawal after running excessively, and rats that ran the hardest had the most severe withdrawal symptoms. The scientists think this finding could mean that moderate exercise might be a benefit to addiction treatment. A runner’s high is way better than any other—and it’ll never land you in the slammer—but always give yourself a rest when needed.

We’ll say it again: Everything in moderation.