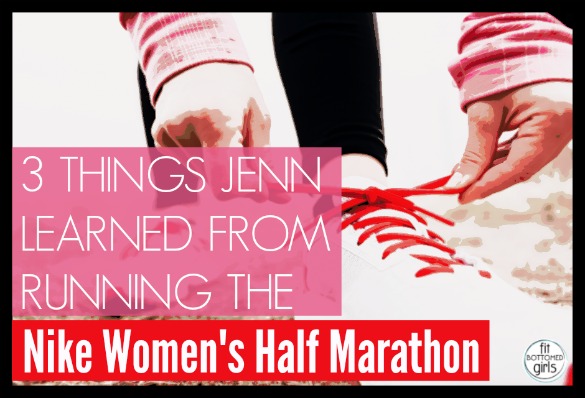 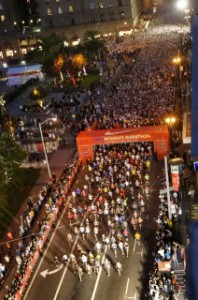 Spur of the moment, I had the opportunity to attend Nike’s Global Running Summit and run the oh-so-popular (and rightly so) Nike Women’s Half Marathon in San Francisco. As Tish has already pointed out, Nike knows what’s up. They wine you, dine you, dazzle you with new products, and let you pound the pavement for 13.1 miles. It’s fitness bliss at its best—and sorest.

In future posts, we’ll review some of the new running gear that I tried out, including Nike’s new Lunar running shoe offerings. (It’s amazing what technology and thought goes into new products.) But for now, I want to give you a recap of the half marathon, or what I like to call “The Biggest Challenge of My Running Life Thus Far.” (I know; it’s probably a little lengthy to catch on.)

The 13.1 miles of the Nike Women’s Half Marathon in San Fran were as beautiful as they were challenging—a start at Union Square, hills, breathtaking scenery, hills, Fisherman’s Wharf, hills, Alcatraz, a MILE-LONG HILL, amazing cheering spectators, more hills, the Golden Gate Bridge (it was covered in fog, but I could feel it), hills, running along the Great Highway between forest and ocean, a few more hills and a finish line with handsome tuxedoed men handing out Tiffany boxes filled with “Run Like a Girl” pendant necklaces. It. Was. Awesome. And hilly. But so totally worth it.

I was even close to tears a few times because the landscape was so amazingly and almost unfathomably beautiful. Plus, I was running with more than 20,000 women from 50 states and 25 countries who raised more than $14 million for The Leukemia & Lymphoma Society. See? That alone makes you feel a little verklempt, right?Despite the hills…and the near-crying…and the walking on hills twice…I took 2 minutes off my previous and only half marathon time. It’s awesome to see how this full marathon training is really getting me more fit with faster times. Sure, I got passed by about 3,000 people (seriously not exaggerating here), but I saved enough in my energy tank that, near the end, I passed at least 20 or so of those people with a final hard push. There’s nothing better than sprinting to the finish line once you have it in sight.

Immediately after the race, my muscles were tight (heeelllooo warm bath), and the two days after the race I was SORE. My legs were heavy as to be expected, but my traps were incredibly sore, even to the touch. I never get sore there after my long runs and I felt like I was pretty relaxed during the race, so I wondered what was up.

And then I realized the one thing I did differently this race than any other time that I run: I texted. A lot. I had the “brilliant” idea to text my husband during the race, so he could (graciously) upload my texts to Twitter and Facebook. (Ironically enough, Twitter was down during the entire time that I ran. Bastards.) It was a fun way for me to let my friends, family and readers know how I was doing, and, honestly, it gave me something fun to focus on. Plus, it reminded me how much support I had out there. All warm and fuzzy stuff.

What’s not warm and fuzzy is that apparently when I text while running, I clinch my shoulders up to my ears in order to keep my upper-body steady enough to text amidst the jostling of jogging. And my body isn’t used to that. Hence the insane soreness. I even have the proof in the race photos, where the photographer got a photo of me texting. My loved ones got a kick out of that, and, truthfully, so did I. At least I look happy texting.

What did I learn, you ask? Three things. One, if I’m going to text during a race, I need to train for it. Two, “running like a girl,” the official motto for this girl-power race, really means running like a bad-ass, and it results in jewelry from Tiffany. And three, I could really stand to add more hills to my training. —Jenn

Disclosure: Nike paid for the trip and race registration, but in no way is this post or our review of the event sponsored, influenced or paid for by Nike. We’re honest, yo!