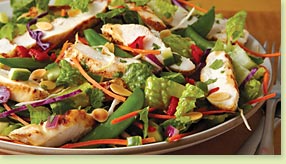 At some restaurants, it can be nearly impossible to find a healthy item. Sure, you can customize many entrees using phrases like “on the side” and “light on the…” and “substitute veggies for (insert less-healthy item here).” But isn’t it easier for you (and the server) when there are already low-cal items on the menu? Most definitely!

Applebee’s has had lighter items on its menu for years now, with its FBG-tested WeightWatchers menu. But now the restaurant has added even more low-calorie items to help diners avoid some of the caloric monstrosities that sit on its menu. The chain’s “Unbelievably Great Tasting and Under 550 Calories” menu may not have the catchiest name, but we’re all about the idea of adding better-for-you entrees. “Tasty” is a key word on the menu, too. After discovering in a survey that consumers who look for healthier options tend to shy away from them for fear the food won’t be appetizing, Applebee’s enlisted the help of nutritionists and chefs to pump up the flavor.

When I hit the ‘bee’s to check out the new menu, I ordered the Asian Crunch Salad (pictured above). It comes with a grilled chicken breast over salad greens, roasted red peppers, sugar snap peas, cucumbers, sliced almonds and a tangy Asian vinaigrette dressing. The chicken was my absolute favorite part of the salad; it was moist, tender, and truly yummy. The salad greens also had a slaw/cabbage mix added in, which gave the salad a more dynamic texture. The vinaigrette was probably my least favorite part about the salad. I ended up using all of it, but was a bit too salty for me. If I were to get the salad again, I’d probably opt for a few more calories and get the oriental dressing on the side and use it sparingly.

My salad was good—crunchy and satisfying—but didn’t blow me away. I’d been pressured to make a snap decision, so after I ordered I wished I had tried one of their other tasty-sounding options. On the new 550-calorie menu they’ve got Grilled Shrimp 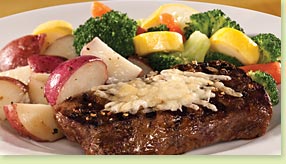 FBG word of warning: When you know you’re going to order a low-calorie item, don’t let your mind tell you that it’s fine to order a Big Brutus beer, an appetizer and a dessert. Remember, you’re trying to keep it light! (Also, avoid these dining traps!)

Have you tried any of the 550-calorie items at your neighborhood Applebee’s? What do you recommend? —Erin