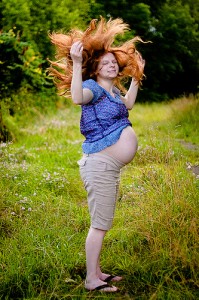 This is how crazy I feel some days. Credit: Dannerzz

I knew life would change when I got pregnant. I was ready for the growing belly, weight gain and food aversions. What blind-sided me? How brain dead I would sometimes feel. And how clumsy I would become. I guess I should say how “extra clumsy” I would become, as I trend toward the clumsy end of the spectrum on my best non-pregnant days.

The mental fog aspect of pregnancy was kind of annoying. I’d forget to turn off the water after washing my hands, for example. Or realize an hour after a shower that I’d forgotten to wash my body. I was frequently at a loss for words—and not fancy million-dollar words. And the backspace key became the most frequently visited key on my keyboard.

As crazy and forgetful as I felt, What to Expect When You’re Expecting made me feel better. The book assured me that the trouble concentrating and the forgetfulness are actually real side effects of pregnancy. Hormonal changes apparently cause a woman’s brain-cell volume to decrease during pregnancy, and they will (allegedly) plump back up a few months after delivery. Phew.

But even tougher to deal with than the mental fog has been the fact that my body no longer wants to cooperate with me. All of its concentration is on the baby, and it’s stolen any ability I had to, say, walk across the room without tripping or wash a glass without breaking it. A brief list of things that have happened in the last few weeks:

Previously, it would have taken me a year to accumulate this many acts of clumsiness. In my pregnant state, I rack them up within days. And of course, my pregnancy book was reassuring on this matter, attributing clumsiness to pesky hormones that cause the loosening of joints and ligaments and water retention. And although there is no solution, it makes me feel better that I’m not alone.

My worst slip-up, though, has been a nasty fall. Down stairs, nonetheless. I guess if you’re gonna fall, make it as dramatic as possible? All I know is that I was heading downstairs to grab my stability ball* and all of a sudden I was on the floor, with my shoulder jammed into the hand rail and my ankle twisted in a very unnatural position. Luckily by sacrificing my shoulder and ankle, I did manage to save myself from landing directly on my butt, but I of course called my doctor immediately and went in the next day for reassurance that all was fine. And all was fine.

Thankfully, my ankle was also fine within a couple of days, which was surprising considering that I couldn’t even walk several hours after it happened. But the incident(s) have been a good reminder that even though I’m feeling good and capable, there are forces at work in my body that I don’t have control over . I’ve had to slow down and embrace the fact that I’m not as agile in body as I am in my head (even if that is questionable these days). I’ve made it a point to watch my step. And to hold the hand rail whenever I go up or down stairs.

And what has this meant for my workouts? It has meant that I’ve been listening to my body. And while I try to push myself, I’m careful not to push myself too hard. I wear supportive shoes. And I’m saving the tough balance work for post-pregnancy workouts. —Erin

*I actually had to Google “workout ball” to see what those things are called. Gah!