Once you’ve acquired the basics for a workout—a good bra, comfortable clothes, good shoes—you can start going after the fun extras I like to refer to as “the toys.” Toys fall into all areas of the fitness world. More than anything, they keep things fun and new for me, which is a must for my self-diagnosed ADD self. 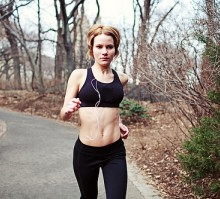 I don’t know about you, but I always feel a bit ironic going for long runs with a bunch of hoo-haw strapped to my body. When I first started training for a marathon,I assumed running would free me—leave me a bit lighter, if you will. Little did I know that in order to remain alive on a hot LA morning, I’d need to strap up like RoboCop in order to get the job done. Because of  my disdain for straps and Velcro, I was a bit bratty (OK, a lot bratty) about trying out any products concerning strapping more stuff to my body. Carolina Baker’s mi-Braeliminated my yap by removing the crap though. Basically, the bra packs a little pocket in the front for swell stuff such as an MP3 player.

Honestly speaking, I wasn’t initially on the mi-Bra express. My first thought was the fear of looking like I had stuffed. I’m a carpenter’s delight (flat as a board) so sticking anything in my bra simply looks like I’ve tried for a Dolly, but created an “Oh golly!” The bra is magical though. I don’t know how it does it, but as soon as you slip something in, the object disappears. OK, score one point for the bra BUT could it hold my old school iPod? My BlackBerry Pearl fit in the bra nicely, so I assumed my dino-Pod would stick out like a sore thumb. Alas, the bra hid it comfortably.

The bra’s not perfect, though.  If you use the bra to hold your beloved music player, make sure you are either comfortable having ear phones stick out of the top of your shirt, you’re rockin’ the wireless, or you’re comfortable sporting a bra without a shirt. Even better, maybe you’re one of those rare species ofwomen who doesn’t need music to work out. If that’s the case, the mi-Bra can hold other goodies like your cell phone, cashola and a key or two. (Yes, it holds all that and a bag of chips—not really chips…Please don’t put chips in your bra.) Also, if you’re the opposite of a camel (i.e. you sweat like a dude since pigs don’t really sweat) then wearing a cotton anything isn’t going to cut it unless you want your electronics sweaty and malfunctioning. I wore the thing on a run, which left my BlackBerry a hot sweaty mess.If you hold in moisture like a psychotic sponge, then pay me no mind.Get the bra, enjoy the arm freedom and with a $5 discount, enjoy the savings! Just enter “fit bottomed girls” in the code section at check out.

So Fresh and So Clean 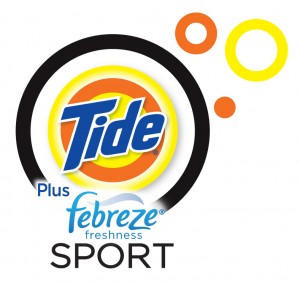 I don’t know about ya’ll, but I loathe the smell of the gym. Any gym. My nostrils flare, much to my chagrin, and the gag reflex begins. (It’s sexy, let me tell ya!) I’ve always been sensitive to smells and hate that the smell is stubborn enough to stick in my workout gear even after I wash. Apparently the folks at Tide have the same gag reflex.

For $8 you can whip out 30 loads of gear and take the funk out of the junk. In a nutshell, Tide plus Febreze Freshness Sport (say that three times fast!) blasts dirt like normal Tide, but now papa has a brand new bag. This stuff considers your precious wicking fabrics while working out the stinky. I love products that multitask! Just remember, like all Tide products, a little bit goes a long way. I washed my stuff, hung it out to dry (because we all know we don’t dry Dry Fit material) and came back hours later to a Tide-scented happy bathroom and now I’m hooked. Now, pulling my clothes out of my gym bag is a nostril treat. I’ve also noticed that once I work up a major sweat, the Tide magic starts to kick in and release fragrance. Bring on the planks! After an hour of dripping sweat, I still smell lovely.

If  smelling lovely after a killer cardio workout isn’t enough to impress you, maybe Venus Williams will. She’s the new face, or rather body, for the new Tide product. Tide has created a Venus site where you can design fun outfits for the tennis rock star and read tips from the pro. 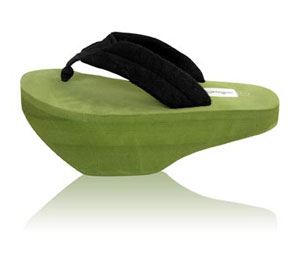 I am here to set the record straight. I like to work out and try new things. Usually I like to combine  the two together and make a nice little FBG sandwich, but not when it comes to my feet and coordination. Let me explain. I trip over air. I trip over cracks that other peoples’ feet would scoff at. I am clumsy incarnate. Jenn and Erin told the folks at TrimTreads to send me a pair of their fitness shoes. I swear those two are cruel, sick women, and they should be ashamed. I pulled the flip-flops out of the packaging and almost passed out. I think my pinky toe may have twitched in fear. Of course, I tried out the darn things because my love for ya’ll supersedes my fear of pain-induced clumsiness. Plus, I was interested to see if they could really lift my buns as well as the other perks listed on the site. I have to say, they’re scarier than they look. (And boy do they look scary!)

I felt like a new-age geisha or something walking around my place in these. The site says to wear them 30 minutes a day, so 30 minutes a day I gave the geisha shoes. I will say my posture improved immediately, and I noticed at the end of round one that my abs were feeling it. It was also fun sitting down and standing back up again. The company doesn’t mention the fun in this but try it anyways.

My buddy boy told me he wore something similar for basketball strength training a LONG time ago when he was in high school. This helped the shoe’s cool creds a bit. They’re not as inconspicuous as Erin’s cute little kicks, but the company gets that. You’re not supposed to rock these on the runways. You’re just supposed to prance around your house. OK, don’t prance. Walk normally or you might hurt yourself. All in all, I give the geisha shoes two big toes up. Anything that helps build the rump and reduces the frump works for me!