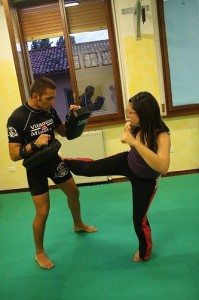 Before I realized how injured I really was, I was mistakenly still working out post-marathon. I thought that as long as I didn’t run, I would recover and be fine. We’ve since found out that was flawed thinking, but I had a good month or two there where I embraced my new non-running freedom with new workouts galore. From regular sweat (and cursing) sessions with Jillian Michaels’ workout DVDs to time on the elliptical to a live Zumba class, I had a somewhat painful blast catching up on some of the activities I didn’t have time for during marathon training.

I also tried not one but two forms of mixed martial arts. The first? A form of self defense called Kasie. Kasie, which I can’t find anything about online but my instructor swore it was what trained Christian Bale to be so quick in the Batman movies, is all about protecting yourself and getting the heck out of the way. Which is perfect for a girl who wants to be more confident when going out to her car at night or spending an evening or two alone while the hubby is away on business. The moves were simple and easy to remember—no flipping dudes over or anything super impressive—but they used your elbows to do enough damage to get you out of a pickle or really freaky situation.

The other class I took was based off of a reader suggestion: Krav Maga. This class was a little more showy and one HECK of a good workout. Krav Maga is used by military people all over the world and involves just about anything gnarly you can imagine: striking, grappling, wrestling, crotch-kneeing, it’s all far game. The class I took was in a weird, industrial part of town and the building looked and felt a little like a bunker. Appearances aren’t everything though. Because I didn’t just learn moves in this class, I got to practice them. On people with pads. While yelling. And not like normal yelling. Like primordial “OMG, did I just sound like that?” yelling. It was fun and kind of liberating. It was most definitely a workout, too. It’s amazing how intervals of screaming, punching, kicking and kneeing can really take it out of a girl. In a good way.

Now, have I had to use my new-found skills? Thankfully, no. But I feel more confident and empowered knowing that I have them in my back pocket to pull from if something were ever to happen. (Get more self defense tips!) And it just reinforces my love and appreciation of workouts. Even though I can’t go out and run or really do anything with my legs right now, I will soon. Using your body regularly not only feels good, it makes you a more capable human being. Whether it’s sprinting away from a bad situation or even being able to carry that huge bag of groceries without batting an eye, working out isn’t just about looking good. It’s about doing good, for yourself!

Have you ever tried mixed martial arts or taken a self-defense class? Tell us about it! And, for the record, the booty is getting better. I hope to be up and running (literally) soon! Woohoo! —Jenn