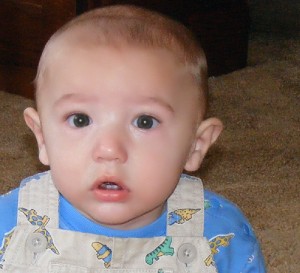 It may look like a blank stare, but there's a lot going on in that little noggin. Credit: Jerry

Children have a sense of right and wrong at an early age. But how early just might surprise you!

Researchers at Yale that conducted research with friendly and unfriendly puppets determined that babies might even know right from wrong as early as six months. In several experiments, the babies gravitated toward helpful or friendly puppets and teddy bears. One child even gave an unfriendly rabbit puppet a smack on the head as punishment.

So will your child still push your buttons and misbehave? Sure. But it’s fascinating that those little brains are already figuring out morals so early, isn’t it?

Do the right thing.