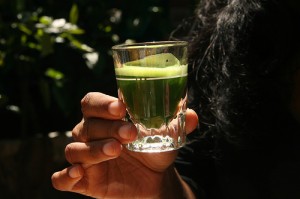 Many moons ago when I first moved to California, a dear friend took me to this popular juice place and promptly ordered me a shot of wheatgrass with an orange slice to chase it with. Never to turn down something without first trying it, I squeezed my eyes shut and took one for the team. Grassy indeed, but the taste was fleeting. The orange prevented me from feeling like I had just ran outside and licked the lawn,  so the shot got two thumbs up.

According to the experts, wheatgrass is more than twenty times denser in nutrients than other choice vegetables, and since it’s considered a vegetable in the grass stage, it’s safe for people with wheat allergies. Score! A couple of seconds of grass tongue and you’ve got a freshly detoxed body and energy to boot.

For that reason alone, I was game to try the Wheatgrass Boost shot that AgroLabs sent me. I’m not gonna lie, I was totally expecting the same grassy icky taste that typicallyaccompanies the greeny goodness I’ve had in the past. To my surprise,the stuff wasn’t grass-like at all. In fact it was sort of tasty. Somehow they were able to mask that “natural” taste with fruits like apple and pear.

However, after reading the label, some foreign-looking words raised my “too good to be true” alarms pretty quickly.  So I brought in the big guns to break down the ingredients for me. Elisa Zied, a registered dietitian and FBG friend, was kind of enough to send me information on two ingredients I had never heard of: arganine and bisulfate of soda (AKA sodium bisulfate).

Rule of thumb, if it could cause bleeding or isn’t recommended for pregnant women, I’ll pass!  Turns out those two questionables ingredients aren’t as natural as I’d personally like. In this case, the two ingredients  combined with the fact that I really didn’t feel a burst of energy were two strikes too many. I think I’ll stick to the pure stuff next time around. Bring on the orange chasers! —Tish

Add a comment Cancel reply
8 Comments
Jenn & Kristen
Diets don‘t work. We know because we‘ve been there.
Get the deets
STAY IN THE KNOW
When new stuff happens, you'll be the first to know!
Latest Offer
Working out at home
Get free strength, cardio, yoga, and meditation videos.
Try them
Podcast
Podcast Ep 137: That’s a Wrap!
Instagram Feed
Instagram has returned invalid data.
X