Could it be possible? Could there really be a heaven made specifically for fit bottomed gals and guys like us? Why yes, there is, and I had the glorious opportunity to visit that heaven,The IDEA Fitness Expo, one fine Saturday afternoon. I thought only folks with products to sell, equipment to buy, or people to train could go, but there were oodles of folks there who were just like me. Non-hard-body hosses who just like to sweat occasionally.)

Young and old, fit and pre-fit folks crowded the booths. There were fitness demonstrations for Zumba as well as Pilates, cycling…You name it, they were sweating to it! Companies with new fitness gear and workout music as well as nutritional foods, supplements and drinks mingled with teens and kidults. I fell in love with the whole concept of a fitness expo, as well as some stuff I thought I’d share. 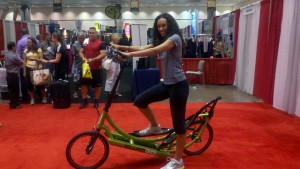 Allow me to introduce you to love No. 1. The ElliptiGo, aka my dream toy, was THE coolest toy I played with at the Expo. A really cool guy who took me outside actually let me test this green dream machine out. While it looks like it would be a bit menacing to ride, it’s far from it. I glided on this puppy with freedom and ease. You just pedal standing up. There’s no awkward arm movements. (I forbid you to think of an elliptical machine!) No weird coordination skills are needed, either. You just need basic balancing skills, $2,199 and voila! you’re gliding through life (literally). If someone gets this bike, please write to me and let me know…I want to live vicariously through you! 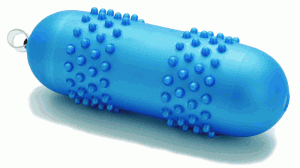 Ever since Jenn shared her physical therapy adventures with us, I’ve been seeing PT apparatuses everywhere. The Expo was no different, but this little blue bullet, known as the ChiBolster, was producing some interesting sounds from the crowd. My curiosity has always killed the cat, so I stepped over to check out the commotion. Known for its multi-functional uses, this little guy was being used by a couple of people in different ways. One guy was rolling it on his foot, while a woman used another one to assist her with ab crunches. I so wanted to send one of these to Jenn to rub on her broken butt, but thought it might be weird to receive physical therapy gifts, no? 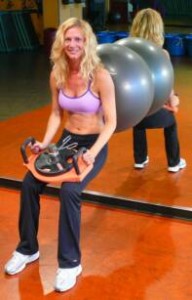 My inner fitness monster began to drool the minute I locked onto the Blaster. Don’t be fooled by the device’s hardcore metal appearance. The Blaster is ergonomic so it easily shapes to conform to your thighs and body. There was a woman demonstrating this bad boy when I approached. She was doing lying butt bridges and sumo deadlifts that made my fit little bottom twitch with jealousy. I can’t wait to see something like this pop up in my gym. I shall bug the gym managers until they make that happen.

Overall, I spent about two hours at the Expo playing. There were of course some plastic surgery booths, (it’s Los Angeles after all!) but overall I was able to immerse myself in a group of fitness-minded folks looking for new and innovative workout tools. I would strongly advise you to try attending one if you so happen to live in a town that’s privy to fitness shows. When boredom hits, there’s nothing like an expo to give you some new ideas! —Tish