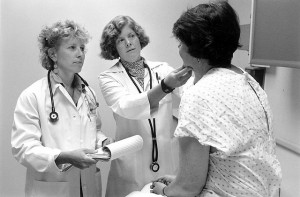 Today’s post is brought to you by Cheryl Rosenberg of the blog Mommy Pants (formerly at  Special Sauce in the House). She’s a marathon runner and mom of three and knows what it’s like to freak out about the “Is it safe or isn’t it?” pregnancy workout dilemma.

I will never forget what it felt like when I, just about seven weeks pregnant, went for my weekend run with my running partners. Yes, it was really hot out, but I wasn’t so worried about that. I’d trained for two marathons. I knew how to keep myself hydrated for a 7-mile run.

But I was completely freaked out because my OB and everything I read on the ‘net recommended that I not allow my heart rate to exceed 140 beats per minute. And I typically jump up to 170 bpm pretty darn fast. Considering I had recently completed a marathon AND my resting heart rate was somewhere in the 50 bpm range, the 170 wasn’t due to being out of shape. It’s just how I am.

So while I watched my buddies run ahead and leave me behind, I walked. Jogged a bit. And kept my eyes locked on my heart rate monitor. I knew I couldn’t even think about running with them anymore. And then, at about 10 weeks pregnant, I stopped going to my trainer because I couldn’t work out hard anyway—and the nausea didn’t help, either.

So imagine my surprise upon finding this article on ESPN.com. And I quote:

In 1985, [Dr. Raul Artal, chairman of obstetrics, gynecology and women’s health at Saint Louis University in St. Louis] said, he and other doctors suggested guidelines to the American College of Obstetricians and Gynecologists to have pregnant women keep their heart rate below 140 beats per minute during exercise. The concern, Artal said, was that the fetus would be deprived of oxygen if a woman’s heart rate went any higher…

Artal said that, in 1985, he and another doctor used intuition and calculation to determine the 140 beats rule. Six months later, when actual testing of women in a lab proved them wrong, Artal said he asked for the 140 beats notation to be stricken from the guidelines.

“For some reason, people caught onto that and they never let go,” he said. “Each time I get asked about it, I said forget about it. I think it should be ignored.”…

To this day, he said, there is no standard limit to how high a woman’s heart rate should be in pregnancy.

I’m not saying I would’ve been one of those women who ran an ultra marathon the day before they deliver. But I certainly would’ve kept exercising for much longer without worrying that somehow I was going to deprive my developing fetus of oxygen.

It is beyond upsetting that women are kept to the modern-day version of the fragile pregnancy -myth because of misinformation that was put out almost 25 years ago. Hello! Obstetricians? Many of you guys/gals weren’t even in med school yet when this stuff came out. How ’bout some recent info?

Yes, I realize some pregnancies are, in fact, perilous. But for those of us who were in fabulous shape when we got pregnant and have no apparent issues with the ongoing pregnancy, we should not be treated like invalids.

I ran one of the slowest three miles of my life the other day, as I gingerly attempt to get myself back in shape after baby. I wonder now how much different I might feel nine months postpartum had I kept running into my second trimester, if I had continued to work out to a level with which I felt comfortable even in my third trimester.

We agree, Cheryl! Pregnant women should always listen to their bodies to avoid pushing themselves too hard, but of course, shouldn’t that be a rule for all of humankind? As I’ve said, I’ll take some special treatment—like getting ahead in the line to the bathroom—but I have to draw the line somewhere so that I don’t get too spoiled. Viva la active pregnancy!  —Erin