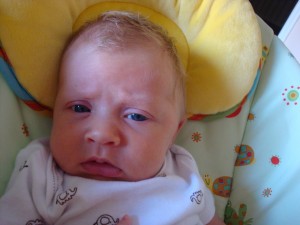 Hey strangers! I’ve been laying pretty low lately since the birth of my little girl. As you can imagine, I’ve been extremely busy—and sleep deprived. I’m slowly getting back in the groove though and have lots of stories to tell. But first, I thought you’d all like to hear the story of little Avery’s arrival on August 7. Here are all the juicy details!

Throughout my entire pregnancy, I had a feeling my baby would arrive early. Never mind the fact that most first-timers go past their due dates, I just had a gut feeling that our baby would show up before September 11. Never mind that people told me to add a week to my due date so that I wouldn’t be disappointed when she didn’t show. I just knew. Mother’s intuition.

My husband and I spent the early part of our daughter’s birthday appliance shopping. When we got home and realized that the refrigerator we’d ordered was too large for our kitchen, we headed back to the store to change the order. We ran into a delivery driver we’d been chatting pregnancy and babies with during our first trip, and he asked my due date. When I responded, he said “Nah…a few hours.” I laughed, never imagining that in just a few hours my daughter would be here.

Within an hour of getting home from the appliance store, my water broke. Only, I wasn’t totally sure it was my water breaking. Did I pee myself, perhaps? It’s 4:30. Let’s just see what happens.

What happens is that contractions start. And I’m slightly confused. Because the contractions are anywhere from 4 minutes to less than 3 minutes apart. And aren’t they supposed to start really far apart? And wasn’t I supposed to get Braxton Hicks contractions first? And isn’t the baby supposed to wait until September? Or at least until the kitchen is done?

So while the contractions were frequent, they were also fairly mild. I was bossing my husband around, making him clean up our disaster area a bit and organize the baby’s room a little more while I packed a bag for the hospital. All the while I’m thinking of what I learned in our childbirth classes: “Don’t rush to the hospital. You have HOURS of labor to go through. Labor at home for as long as possible. It’s not like the movies.”* Besides, I knew if my water had broken, this baby was coming whether I was full term or not.

So we’re getting all of our stuff together when all of a sudden the contractions are like, “HEY! WE’RE NOT MESSING AROUND!” And I’m like “For the love of God, these contractions aren’t messing around.” So we call the doctor and head to the hospital.

My husband gets in the car. And I just stand next to the car with the door open. Gripping the roof of the car. Unable to get in because sitting in the car basically sounded like the worst thing in the world for my uterus to do at that point. Also, I was feeling like I had to push, which I smartly kept to myself. My hubby coaxed me into the car for what was the most miserable 15-minute car ride ever. I wait until we’re two stoplights from the hospital before I tell him that I feel like I need to push. He tells me “Don’t push! Pull!”

We pull up to the hospital entrance, jump out of the car and head straight to labor and delivery. I feared that if we parked, I’d be delivering in the parking garage. We walk into L&D, him supporting me as I try to walk, and I say “I feel like I need to puuuush.” The nurses look up from the nurses’ station with surprised looks on their faces, ask for our last name and direct us to room 7.

As I enter lucky room 7, I’m stripping off my clothing because the need to push is undeniable at this point. No “Hi, nurse, nice to meet you.” I’m like “This baby wants OUT!”

After the craziness of labor, my only concern was that the baby was healthy. So it took a minute for us to realize that we didn’t even know the baby’s gender. I was genuinely surprised when my husband announced “It’s a girl!” I think I would have been surprised either way. And really, I was surprised to have a baby outside of my belly at that point in time.

Because she was so early, she earned herself a stay in the NICU for almost a week. She had an IV for a day, was hooked up to monitors and got to go under the lights for jaundice.

Now we’ve settled in at home and have tried to get into a bit of a routine. That routine is called “There is no routine.” Mostly we’re just trying to get a bit of sleep and soak in every minute with our little girl. She’s changed so much already. She’s got my dimples, my husband’s chin, crazy blonde hair, the superhero ability to sleep through anything like her dad and the habit of sleeping with her mouth wide open like her mom. She’s perfect.

Stay tuned in the coming weeks as I share more about life with a little one! —Erin

*We want our money back. IT IS EXACTLY LIKE THE MOVIES.

**My discharge form says that I arrived fully dilated and gave birth within 30 minutes of my arrival to the hospital.***

***Good thing I’d been planning on having a drug-free experience because I wouldn’t have had time for an epidural had I wanted one!