We get so many inspiring emails from readers, and this week we’re sharing a running success story with you! Read on for Paul Brown’s inspiring story of going from regular guy to Disney World marathoner, told in his own words through a Q&A. And feel free to share yours! 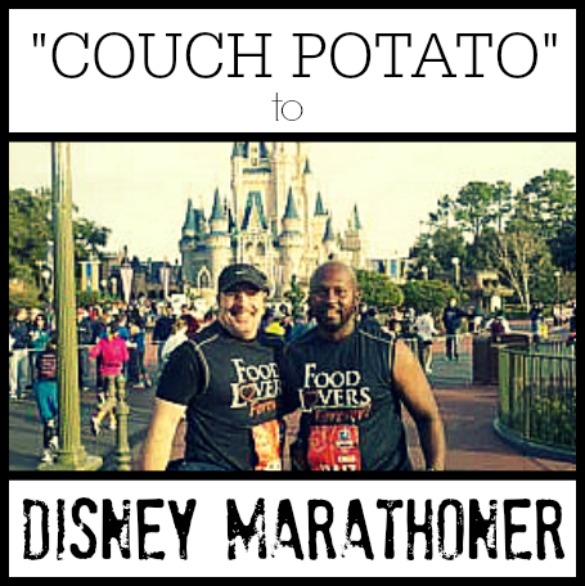 Why did you decide to run the Disney Marathon? When one of my sons (Joshua) was in 4th grade, (2000) he joined a running team at his elementary school. In order to connect with him, I started running as well. I had run in the Army but never knew that people actually ran long distances “for fun.” I also didn’t believe at the time that a little kid could run 3.1 or 6.2 miles—but he sure proved me wrong. After a race his 5th-grade year, my son turned to me and said, “Dad, do you think we could run a marathon?” I didn’t even know what a marathon was and when I found out it was 26.2 miles I thought, “You’ve got to be crazy!” But the thought always remained in the back of my mind.

Fast forward to fall of 2007, and I am watching The Biggest Loser. This was the first season that the final four contestants ran a marathon at the end of the show. I watched in amazement as these contestants finished the 26.2-mile distance. I thought to myself, “If they can do it (and many of the contestants were still bigger than me at the time), then what’s my excuse?” The show has been a very big inspiration to me along my journey towards health and fitness. 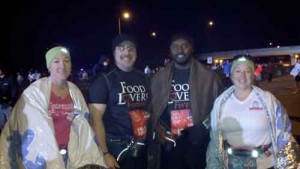 The guys make friends with Sueann Holly at the start.

Now fast forward once again to December 2009. I watched The Biggest Loser contestants run a marathon again, but this time something was different. I had started the Food Lovers Fat Loss System in August of 2009 and had dropped 13 pounds by this time. I had also started to gain some strength by utilizing DVD workouts. So in December 2009, I set out to see if I could go 7 miles. I was very apprehensive as I began the 7-mile challenge, waiting to see if my body would quit, but it didn’t. In fact, at the end of the 7 miles, I still felt great—like I could keep going and going. Mind you, I was using a run/walk/run method, but I didn’t care— I had finished 7 miles.

Next, I began searching for local half-marathons because I really didn’t think I could go 26 miles after being a total couch potato for the last three years. I found a half-marathon (Pensacola Marathon) in November of 2010. I asked a few friends if they would like to join me, hoping that at least one would take me up on it. To my pleasant surprise, my best friend Karlis who had just retired from the Navy earlier in the year said, “Yes!”

Then in January 2010 I read a very inspiring post on this website by Jenn. I was so inspired by the blog, and it made me realize that perhaps I, too, could finish a marathon—and the Walt Disney World Marathon seemed to be the best choice for a first-time marathoner! 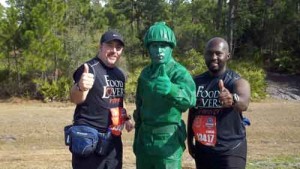 Get up that hill!

Would you consider yourself “a runner” before training? What about now? Before August 2009, I was a total couch potato. In February 2010 I started using Couch to 5K program. After completing a 5K in March 2010, I went on to complete a 10K race in May. Then in May, I knew I needed to get serious about training for the half and full marathons, so I started talking to people on SparkPeople that run half and full marathons. I eventually settled on Jeff Galloway’s Run/Walk/Run method since I was already used to doing run/walk/runs.

I know some people who think you are not a runner if you don’t run the entire distance, and I can respect their opinion. However, anyone who can finish a half-marathon (13.1 miles) or a full marathon (26.2 miles) has my respect and admiration however they finished it. Plus, I just loved it when I passed some of those people near the end of the race because I was stronger for taking the breaks. There were signs people were holding up for the runners along the marathon route that said, “Run, Walk, Crawl, just keep going!”

Today, I do consider myself a runner. I still use the run/walk/run method because I believe it gives me the best opportunity to complete longer distances and remain injury free, but “Yes! I’m a runner!” Don’t think so? Let’s go for a 26-mile run and just try to keep up! 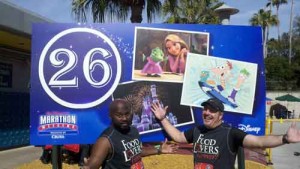 How was the race? Did you reach your goal? The Walt Disney World Marathon was one of the most incredible experiences of my life. During the marathon, I felt a wide spectrum of emotions and feelings from jubilation to doubt, but the thing that made it all worth it was persevering and finishing even when you think you might not be able to at the time. Crossing the finish line after months of preparation and finally achieving that ultimate goal, well I just don’t know if there are words to describe how I truly felt.

What is your best memory from the race? Does one mile stand out? There were so many great memories from the race, such as meeting fellow runners you didn’t even know prior to the weekend who become your best friends because of the journey you just took together.

There is more than just one mile that stands out. Of course the first mile is so exciting and you are so ready just to get started and get going. Mile 10 to 11 was awesome, as we were running through the Magic Kingdom and there were all the opportunities to take photos with Disney characters and people cheering you on that it totally takes your mind off of what you are truly doing (running 26.2 miles). Around mile 15 another couple of runners (new friends) that we had been passing and then they had been passing us caught up to us and surprised us. They ran with us for a few miles and shared in our journey and encouraged us.

Mile 21 was also incredible as we reached this hill that at a 21-mile mark you do not want to see. But at the top of the hill was the Sargent (Army Man) from the Toy Story movie hollering at us in only a way that a cartoon Drill Sargent can to “Get up that hill!” Can you say perfect timing?

My most emotional moment came somewhere between mile 24 and 25, as we were nearing the end, tears started flowing down my face. Partially from pain, but also partially because after all this time I knew the goal was in reach and that I would accomplish something that 10 years earlier when my son had asked me to run a marathon, I thought was impossible. By the way, my son wasn’t with me in person on Sunday as he is now serving in the U.S. Navy, but he was definitely with me in spirit.

Lastly, I don’t think I will ever forget posing for a photo at the mile 26 sign when you finally realize that victory is only 385 yards away at last. How do I define victory? Not by winning the race, but by finishing the race and overcoming the obstacles that stood in the way of getting there.

Any tips for other beginning runners? Lots!

1. Yes, you can do it! Just take one step at a time.
2. Find a running buddy. A good running buddy is invaluable, and mine kept me going several times when I might have quit and given up.
3. Miles 21-26 are going to hurt. Your legs will hurt, your knees will hurt, everything below your belly button will hurt. Just keep going!
4. Don’t worry about your time. You don’t have to win a marathon to be winner, but finishing a marathon makes you a winner because you have now done something that 99 percent of the world’s population has never done.
5. Stick to your training schedule and don’t do too much too fast. In other words, like my father used to tell me, “Do as I say, not as I do!”
6. Find a group of runners locally or a running group online. Their advice is invaluable, and their attitude is contagious.
7. Don’t give up. There may be trials, tests and setbacks along the way just like in life. Remember, you never really lose unless you quit and give up.
8. Announce to the world that you are running a marathon. This way you have to follow through and can’t give up. Too many people will be watching you and counting on you to finish and perhaps because of you they will be encouraged and inspired to overcome whatever obstacles they are facing as well.

Will you run another race? Most definitely! In order to make sure that I would keep going, I had registered for a 15K Double Bridge run and another half-marathon. Now as far as another full marathon, I haven’t registered for another one yet and had you asked me between mile 24 and 25 of the Walt Disney World Marathon, I would have said you were crazy. However, there is just something about overcoming the obstacles, challenges and persevering that makes me know that I have another marathon in me sometime soon.

Paul, you are a Fit Bottomed Dude to the Nth degree. Thanks for sharing your story with us and glad that we could provide that extra push to go after your dreams. I have no doubt that your son is BEAMING with pride, like we are. Congrats and keep us posted on future successes! —Jenn