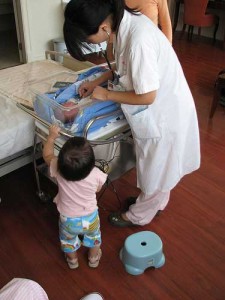 A nursing student posts a picture of a placenta on Facebook. What happens next? Uproar. Mayhem. Expulsion from the nursing program. And now, my discussion of placentas! Yay!

The four students tied to the placenta pictures (har har. Or should I say “yuck yuck”?) were temporarily dismissed from the nursing program and will be able to reapply in August. One student is suing the school because she had plans to graduate and move, and the little expulsion is throwing a wrench in her plans. Bummer.

Naturally, there are two main schools of thought: 1) It’s a placenta, not a body part. Who cares? and 2) It’s a gross violation of ethics and privacy.

I  attend both schools. Sure, it’s a placenta. Big deal. Every baby-mama pair has one. Most people are not attached to theirs (again with the jokes!), and don’t mind their placentas being disposed of with other medical waste. (Those of course who decide not to eat them or plant them under trees, that is.) But: Did the owner of the placenta in question give permission to photograph and post the placenta in question? And isn’t it a slippery slope? If a nurse taking unapproved pictures of a placenta is fine and dandy, what’s to stop her from taking other unauthorized images and using them for her own entertainment?

The issue isn’t whether it’s a placenta or a severed foot. The issue is patient privacy. And patients shouldn’t have to worry about anyone at a hospital—nurse, doctor, custodian or otherwise—taking a picture and posting it on social-networking sites. Not to mention that a nurse taking pictures and posting them sets a bad precedent and is about as unprofessional as it gets.

What do you think? Do you think the school went too far in expelling the nursing students? Would you care if it was your placenta in question? I’d love to hear your placenta point of view! —Erin