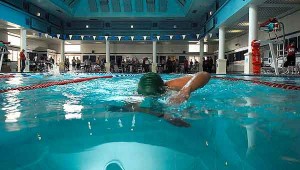 There are two types of races in my mind. There are those that are completely doable, and then there are the ones that cover a distance that would take a substantial amount of time to drive, let alone complete without aid of a motorized vehicle. And my friends, I’ve signed up for one of the latter.

Somebody hold me. Okay, thanks. That’s better.

I have a little experience with triathlons, having completed three sprint distance races over the last few years, but those were all basically half the distance of this race, and they were on a much smaller scale. The St. Anthony’s triathlon is huge, and attracts wicked-fast talent from all over the world…which is why I’ve entered in the novice division, along with my friend Jodi.

There are a few motivators behind my decision. First, I honestly love triathlons—I’ve had amazing experiences at the races I’ve done. The people are friendly and encouraging, the atmosphere is tremendously inspiring, and, even when I’ve had a really terrible finish (as I did with my most recent race where I became dangerously dehydrated), I feel truly accomplished when I cross the finish line.

Second, if you think about it, each distance alone isn’t all that scary. I swim well over a mile in most of my workouts, so that’ll be…well, okay, not cake, but I know I can manage it. And, fingers crossed, I’ll finish within the first half of participants in my wave.

The bike is a bit trickier because, for one thing, I just don’t enjoy it—it hurts my lady parts—and for another, until a few days ago I, erm, didn’t actually have a bike. Now that I have one (it’s a pretty blue used Salsa road bike, and it has chili peppers on it, which was kind of the selling point for me), I’ll be honest—I’m terrified to take it out for a spin. I do not want to fall off. But I have almost four months to learn how to stay on, right?

And then there’s the run. I’ve done a half marathon (yes, it was years ago, but whatever—I still have the finishers’ medal), and I generally run 3 to 4 miles a few times a week. I’ll have to amp up my routine a bit, and it’s totally likely I’ll take a short walk break (or 10), but I’ll find my pace and cross that finish line. I absolutely will.

The final reason for signing up for this race? I want to see how far I can push myself before it stops being fun. If I enjoy this—both the training and the race—and if I’m not burned out come May, I might (might) consider signing up for a half-Ironman distance. I have zero interest in ever doing a full Ironman—unlike Jenn and Tish, I’m no marathoner. However, the half (or 70.3) distance intrigues me, and I think after this Olympic distance race, I’ll have a fair idea of whether or not that distance is something I want to take on.

I honestly believe that just signing up for a race and showing up at the starting line is a big win, but I want more—I don’t have a time goal in mind just yet, but I know I want to finish in a time that makes me feel like I didn’t leave anything on the course. To help me reach that goal, I’m working with a coach who has developed a training plan for me, am using the buddy system for some of my workouts, and will continue taking the swimming classes I started over the summer. My friends and family are all really supportive as well, and when my motivation is lacking, I’ve turned to Twitter, where several of my Twitter pals have given me a push in the form of “Get your ass out there and run!” tweets. I might be on my own come race day, but having a small team of people to work with while I train has made staying committed to my training about a jillion times easier.

I’ll be sharing tidbits about my training leading up to the race, and y’all, I won’t hold back. I’m going to tell you what I’m loving, what I’m hating, what I’m excited about and what’s scaring the crap out of me. But the bottom line is that I’m really excited to be training for this triathlon, and I’m excited to take you along for the ride, regardless of how much that ride might hurt my hooha.

Got questions, advice or comments? Let’s hear ‘em in the comments! —Kristen