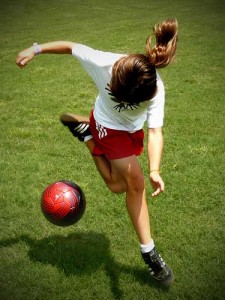 Today’s post is written by Kim Slaughter. Kim is a full-time research administrator while finishing her Master of Public Administration degree in nonprofit management and health services administration. She also serves as vice-president and development officer for the Kansas City, Mo., council of Girls on the Run—a national nonprofit program that encourages pre-teen girls to develop self-respect and healthy lifestyles through running.

Teen pregnancy. You probably thought that was on the decline, right? Well, it was. After several decades of the teen-pregnancy rate climbing, it finally peaked in the early 1990s and then decreased through 2005—then there was a 5 percent spike. The United States has the highest teen-pregnancy rate of the industrialized world, and recent statistics show that every hour 100 teen girls get pregnant unintentionally.

Obviously, the battle is far from over.

Many weapons are used in the ongoing war against unintended teen pregnancies. Studies show some of the effective prevention weapons we have are media, youth-development programs, [non-abstinence only] sexual education courses in schools…and something that may surprise you: sports.

Sports?! Uh-huh! In study after study, pre-teen and teen girls’ involvement in sports continue to show a positive impact in decreasing many risky behaviors—including teen pregnancy.

The Teen Pregnancy and Sports Connection

A look at the facts on sports and teen pregnancy show quite a compelling case:

Maybe it has a little something to do with being supervised after school, but it seems to go much deeper. So far, researchers believe girls may be using the self-reliance, confidence, sense of physical empowerment and social recognition gained through athletic participation to resist social pressures to exchange sex for approval or popularity. It is believed that being surrounded by positive role models and peers also has a lot to do with it. Unfortunately, physical activity and athletic participation decline as early as late elementary school for girls.

Maybe these statistics aren’t surprising to you or maybe they are downright frightening (I didn’t even mention all of the negative health and life effects to pre-teen moms and their babies!), but remember that you can help give girls the tools to make better decisions, and it may be as easy as helping them tie their gym shoes and dropping them off at practice—whatever that practice may be.

Here is some more good news—athletic participation is also helping young girls to avoid smoking, eat healthier foods, be happier (lower rates of depression in girls who play sports), get better grades, and have better relationships in their teen years and beyond.

As teachers, parents, friends, coaches and Fit Bottomed Girls, we have the arsenal to make a difference. Let’s get out and play! —Kim Slaughter