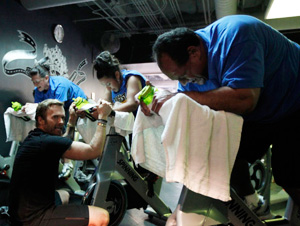 It’s been a few months since I got really fired up during The Biggest Loser, but last night, I think I hit an entirely new level of rage. Sure, seeing Jillian’s beach pad and tagging along to Bob Harper’s Spin class was AWESOME (my personal dream to Spin with Bob, by the way), but what is with people wanting to go home this season? Do you not know that people are —sometimes quite literally—dying to get on the show? That they’d do anything for the opportunity? Anything? Oh, Kaylee, you make me cah-razy. Enough so that even Shay from The Biggest Loser season 8 was wondering if I was OK, as my usual sunny disposition was filled with f-bombs and declarations of pulling my hair out on Twitter. Add to that more team swappage, the fact that everyone seemed to be upset with Ken for losing weight—which is the point of the show—and that Kaylee obviously doesn’t have everything figured out (you never stop learning, honey!), and I lost my ish.

On the upside of it all, even though I would have liked to have seen Arthur come back, it was fun to see Jay. And again, seeing Bob’s cycling class gives me delusions of sweating in his presence. Which sounds weird, and also amazing. For more on last night’s episode, check out the episode 12 recap video below by Mark Pinhasovich from BL season 10!

What did you think about last night’s episode and the Kaylee fiasco? Give us your thoughts in the comments! —Jenn