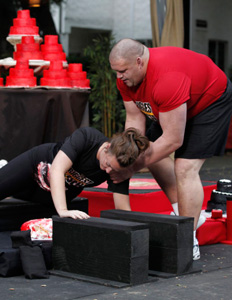 Sometimes I’m amazed at how much The Biggest Loser producers can still shake the game up after 11 seasons, but boy, can they. Last night was a prime example. Between naming team captains to having the trainers only work with two people on each team to allowing just one contestant in the kitchen to cook for the entire team to a muddy challenge, it definitely switched things up and made for interesting TV.

While I haven’t come out as saying I really, really like the new trainers Cara and Brett, they’re starting to finally grow on me. I think Brett knows his stuff and is a pretty good guy, and I find Cara’s expressions to be hilarious and highly entertaining (although that’s probably not the look she’s going for). Although I’m sick of seeing boxing all the time, I did enjoy Cara’s workout of having them get up over and over again—no matter how many times they were knocked down. Not only did I like the symbolic message about the workout, but it also gave me a reason to sing Chumbawamba for an hour. Guilty pleasure? Check!

Thankfully the weigh-in wasn’t nearly as dramatic as last week’s, and Bob looked deliciously dapper yet again. Not to mention that the voted-off player seriously found her inner athlete at home. Again, good TV. For more on last night’s episode, check out the episode 10 recap video below by Mark Pinhasovich from BL season 10!

What did you think about last night’s episode? Tell us in the comments! —Jenn