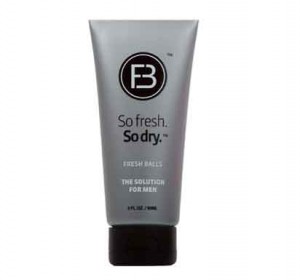 Today’s extremely humorous post is written by Scott Barton, personal friend of the FBGs living in Lee’s Summit, Mo. A few months ago he stumbled upon an—erm—unique product, which we coerced him to sample and write about. Mwahahaha!

When I was first approached to write this review (which I have to admit is odd to have your friend’s wife ask you to write about your family jewels), my mind raced as to how many different and humorous ways I could come up with to describe the boys. There are so many different phrases and words that conjure up the most serene imagery to the downright grotesque. Man! This is going to be great! Freedom to wordsmith as many inappropriate jokes as I could under the guise of good journalism. YIPPEE!!!

While waiting for the tube of Fresh Balls to arrive, giggling to myself all the while, I wondered what kind of product would name itself such a blunt name. Sure, the marketing is easy and straightforward. No doubt about what the product does, but would it come in silly packaging and be as jovial as the name implies? To my surprise, the tube is quite sophisticated. The graphic design isso chic and suave in comparison to what I had envisionedthat it threw me off. Maybe this product is not a big joke. I don’t know what I was expecting, but Fresh Balls looked like the real deal.

Then came the moment of truth, I actually had to try it. In an instant, my truckload of nut jokes went out the window. This stuff is a miracle of modern science. There is no time for twig-and-berry jokes when you have something in front of you that defies the laws of physics. I remember from high school physics that matter exists in three states. Usually, as temperature rises, matter goes from a solid to liquid to gas. Nope! Not Fresh Balls! It comes out of the tube in a liquid paste with the intent of applying it in a warm, moist place. What happens next is beyond all comprehension. It turns into a very fine powder. Who saw that coming?

The magic doesn’t stop there. This powder not only lubricates like the finest motor oil, but it also claims to absorb moisture. And absorb moisture, it does. BP should have squeezed a couple of tubes of this stuff on that little leak they had…but only a couple, as three might have dried up the entire Gulf. Yes, a liquid that gets warm and takes on more moisture becomes a solid. The mind can only wonder in amazement.

Overall, Fresh Balls did exactly what it claims to do…a little too well. While refreshing when applied, I felt that it dried my skin too much, as well as stripped me of all of my precious sac jokes. But ifyou, or the one you love, has a Gulf-sized moisture problem or an abundance of cojones jokes, this is the product for you. —Scott Barton

A big thanks to Scott for having the, ahem, balls to try this! —Jenn