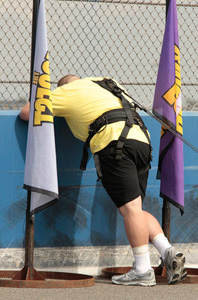 This photo pretty much says it all...

Last night’s episode had a lot of hype swirling about it. Like, a lot of hype. But did it live up to it? Yes…and no.

First, where it did deliver. The one-hour episode was jam-packed with action. We got to see former contestants like Sam, Ali and even Tara in the previously held pull-the-car-like-a-bad-ass challenge that was revisited (and she won—again!). And after some honesty from Rulon Gardner (I guess you can call it that…), Cara just let him get away with saying he was “ready to go home” (can you imagine Jillian’s response to that statement?!)—which he did when he WALKED OFF THE SHOW at the weigh-in. His reason? Personal. What. The. Hell. And then Kaylee gained two and rightfully went home. Finally. (Happy to see her at home rocking it though and getting her first-kiss on.)

Now for where last night’s episode fell a little flat. So little of the trainers! We’re in serious Bob withdrawal. And with Jillian leaving the show after this season? Ah, it hurts! We wish there had at least been an interview with Rulon after the show that either showed how he was doing at home or somewhat explained his throwing his hands up. But, maybe that’ll come next week. We hope. We also hope that next season all of the participants are a little more respectful of the show and the experience they’ve been given.

For more on last night’s episode, check out the episode 17 recap video below by Mark Pinhasovich from BL season 10!

What did you think about last night’s episode and Rulon’s walk off? Give us your thoughts in the comments! —Jenn

Add a comment Cancel reply
28 Comments
Just for You
Drop the diet for good
A variety of anti-diet coaching programs just for you.
Get free access
STAY IN THE KNOW
When new stuff happens, you'll be the first to know!
About Us
Jenn and Kristen are passionate about letting women know they're more than a number on the scale.
Get the deets
Instagram
X