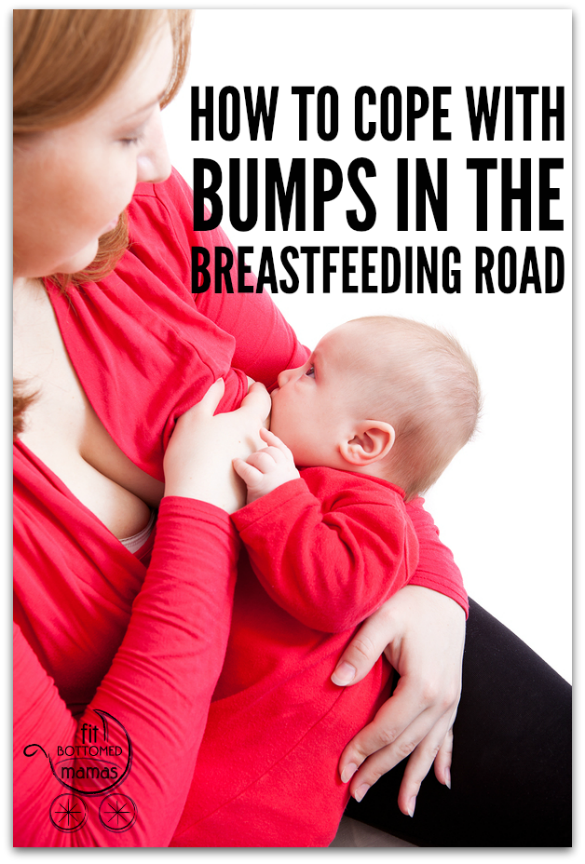 I had no idea what to expect when it came to breastfeeding. I mean, never before in my life had I used my boobs to feed a human, and really, how do you prepare for that? It’s not really something you can practice before game time—you definitely learn on the job. And under pressure.

I knew I wanted to do it, and I knew I was stubborn enough to do it in the face of most obstacles. And while breastfeeding now feels like old hat, there have definitely been obstacles. Breastfeeding has been worth it—it’s great nutrition, it’s super convenient and it’s free—but it hasn’t always been all buttercups and rainbows. Hopefully sharing the bumps in my breastfeeding road will help other moms and moms-to-be cope with similar setbacks!

Awkward. Yeah, breastfeeding is the natural way to feed a baby, but holy cow, was I not prepared for how awkward it is. Add a ravenous baby who has never eaten before to a nervous new mom who has never nursed a baby, and it’s a learning curve for everyone! Accept the fact that you will feel super awkward and incompetent the first few times, and enlist help! This is not the time to be a DIY expert—an experienced nurse or lactaction consultant is a godsend. Yeah, it’s also a little awkward when the nurse grabs your breast and literally smashes the baby onto your boob, but you’ll be on the path to success with a pro’s reassurance and guidance.

Ouch! “They” say that if you’re doing it right and the baby is latched on properly, it shouldn’t hurt. And that’s true: I barely feel it now. But at first? There will be pain and soreness. You’ve got a hungry baby on your boob for hours and hours a day and you’re not made of stone—you’re going to be sore. The good news is that it is temporary. Two weeks in, I was feeling much better and by week four, I was forgetting my baby was latched on. If you’re in a lot of pain or dealing with cracked or bleeding nipples, have a lactation consultant or nurse evaluate your baby’s latch. But just know that even with a perfect latch, it’s not going to feel awesome at first.

Negative Nancies. Ideally, everyone would be a huge supporter of your decision to breastfeed, but that’s not always the case. Maybe your mom didn’t breastfeed and doesn’t understand your desire to do it; maybe your new-mom friend sees it as an inconvenience; maybe your mother-in-law doesn’t think the baby is getting enough to eat. Trust your gut and trust you and your partner’s decisions. Some of my daughter’s very first feedings were far from successful. Because she was early, she preferred sleeping to eating. One of the NICU nurses made me feel like such a failure, saying that she wasn’t able to breastfeed her baby either and that I could always try again with my next child. And this was in the first 24 hours of my daughter’s life! Don’t listen to negativity and be as stubborn as you need to be.

Zzzz. Or lack thereof. When you’re the one responsible for providing the baby food, there isn’t a lot of time for sleep at first. Even if you’re pumping so someone can help you out with feedings, pumping itself cuts into precious sleep time! Just know that the first month is exhausting, but your baby won’t always be attached to you 24/7.

The later ouches. Even when you think you’ve gotten everything figured out, your body may not always cooperate. For whatever reason, if I went too long between feedings or wore the wrong bra, I’d get plugged ducts, which means that the normal flow of milk is blocked, leading to annoying, painful engorgement. If not treated quickly (hot compresses and massage usually do the trick), a plug can lead to an infection. At one point, it was one fun problem after the other, and I thought my boobs had taken over my life—I started experiencing sharp pains called vasospasms. The great news about all of these setbacks is that they can be remedied—kellymom.com solved every painful problem I had.

Anxiety. I noticed early on that a few minutes after my daughter would start eating, I’d feel a distinct feeling of anxiety. It was always brief, less than a minute, but when I Googled anxiety and breastfeeding, I came up empty handed. Then I came across this article about anxiety associated with the letdown reflex. While the anxiety was minor, it helped to know that I wasn’t the only one.

Even though I’ve dealt with a few setbacks along the way, for me, the bumps have been only a fraction of my overall breastfeeding experience. How about you? What setbacks have you dealt with while breastfeeding? —Erin