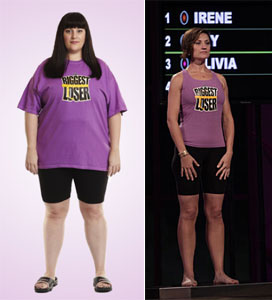 *SPOILER ALERT* This post reveals details from last night’s The Biggest Loser finale episode. So if you don’t want to know the dramatic details and results, click away, my friend, click away!

As if yesterday’s news that Anna Kournikova will be the new trainer on The Biggest Loser wasn’t crazy enough, last night’s finale didn’t disappoint. And for those of you who wanted a BL night of girl power? Well, you got it. Big time.

First, let’s talk Jillian Michaels leaving the show. Heartbreaking! I loved how the live audience gave her a standing ovation and she got to say her goodbyes. That show just won’t be the same without her. We also got to hear a few words from Brett and Bob (there’s never enough Bob though—especially when he’s all spiffy looking in a suit and all), but—not so coincidentally I imagine—we didn’t hear a word out of Cara, nor did Ali ask her any questions. Interesting. And can you say “awkward” when Anna Kournikova was introduced in front of Brett and Cara? That’s gotta hurt the ego to know that you’re not being promoted for next season.

Also absent from last night’s show? Rulon. With no mention of why he left The Biggest Loser—and the only general observation that those who willingly leave the show leave the WHOLE show including the cash-money—rumors continued to swirl about why Rulon left. Some believe he was caught cheating; others that he left willingly; others a little of both. Not sure if we’ll ever get the full story straight from the Olympian’s mouth on that one, but fishy indeed.

But let’s switch our focus to the AWESOMENESS of last night. Deni surprised the pants off of me, winning the at-home prize with a 125-pound loss. Okay, maybe I’m exaggerating, but she looked totally different! Then, as most of us expected, Irene beat out Jay for a spot in the finale three, leaving an all-woman finale. It came down to the sisters Olivia and Hannah, and while both looked ah-mazing, Olivia ended up winning with just a slightly higher percentage of weight lost (and three more pounds). Saying it was “close,” is the understatement of the season.

For more on last night’s episode, check out the BL finale video recap below by Mark Pinhasovich from BL season 10, and an exclusive interview with Biggest Loser winner Olivia Ward from our pals at DietsinReview!

What did you think about last night’s finale? Are you happy with the winner? The girl power? Tell us about it in the comments! —Jenn