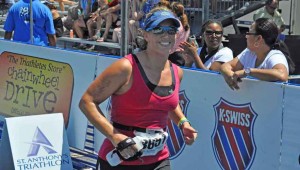 Now, I knew St. Anthony’s was a huge race, but I really didn’t grasp the scope of it until I participated. In addition to the huge number of people involved (approximately 4,000 individuals and 150 relay teams signed up, then you have all the spectators and volunteers), it’s also big on talent, with the first two waves showcasing some of the world’s top pros. I mean, before I even got in the water, I watched Sarah Haskins run by on her way to victory. (She made it look totally effortless, by the way. Ugh.)

The race wasn’t without its challenges. Despite the fact that the water was remarkably calm and comfortable on Saturday when I went down to register and check out the course, the wind kicked up that night, causing officials to change the location of the swim and cut it down to 1,000 meters, meaning we swam just less than two-thirds of a mile. Most people were delighted by this, but since I’m stronger in the swim than any other leg, I was pretty disappointed. 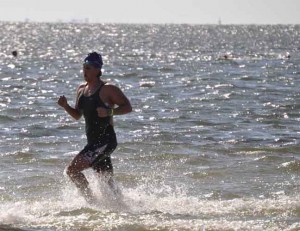 Because I signed up in the novice category, my wave was one of the last to go. I had to have my transition area set up and be body-marked by 6:45 a.m. The first wave took off at 6:50. I wasn’t scheduled to go until 9:05, which turned into closer to 9:15. For those of you who don’t have a calculator handy, let me just tell you that it was a long effing time to sit around waiting. My friend Jodi and I killed time by standing in line for the bathroom, eating bananas, and watching earlier waves, so time went much more quickly than I thought it would.

The other downside to such a late start is that by the time I started to run, it was hot. I hit the course just after 11 a.m., and thank goodness I was prepared. I used sodium tablets, Gu and lots of cold water to keep myself safe and hydrated. I also used the old ice-down-the-pants trick, which was AWESOME until I realized the ice cubes down the front gave me, as the Fug Girls would say, serious polterwang, and, well, I’m a little vain about that. What if there were pictures? I don’t need those kinds of rumors going around. (I still totally kept ice in my cleavage whenever possible, though. It was excellent. I highly recommend it for hot days.)

So, you’ve got my final time, but how did I really do? While I’m completely proud of my results, and I know there was absolutely nothing left for me to give at the finish line, I didn’t quite meet my goals. Out of 55 people in my division, I came in fifth in the swim—I really, really would’ve liked to be in the top three (or just win it flat out), but hey, I’m not going to complain. The first gal out of the water beat me by more than three minutes—she deserves that one! (But oh, if I could’ve just shaved 30 or 40 seconds off my time…) 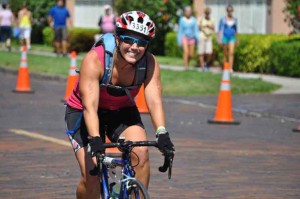 I really surprised myself on the bike—not only did I not fall off or crash into anything (hooray!), but I also kept a really solid pace (17.5 mph) despite what I’ll call an “exhilarating” headwind. I just missed the top 10 in the Female Novice division (again with the 30 or 40 seconds!), plus I ate a Gu while riding and even drank Gatorade out of a real bottle in addition to using my Camelbak hydration pack. I’ll let you guess which of those I consider the bigger win.

My run was…well, it wasn’t my best work. The 10K took me 1:08, meaning I kept just under an 11 min/mile pace and ended up just below the middle of the pack in my division. I really wanted to keep it closer to a 10 min/mile, but it just wasn’t there. There were several times I actually found myself walking, and said, out loud, “Dammit Kristen! You haven’t trained for four months to walk this stupid course! Now move it!” I might’ve scared a couple of fellow participants, but I kept my feet moving. Mostly, anyway.

Oh! And transition! You know, where I completely jacked things up last time? It really went well. I actually had my transition area set up for a couple of days in the hotel room and mentally went through what I would do upon returning from my swim about a million times. On race day, it was nearly automatic. I had things set up properly, I had a plan, and I was able to rock right through it. Sadly, my time doesn’t really show that—we had to run about half a mile from the end of the swim to get to transition, and then, the transition area itself was quite long, so even though I swear I was speedy, my first transition time was still 7:58. Considering times ranged from 5 minutes to more than 16 minutes, I’m kind of okay with that. 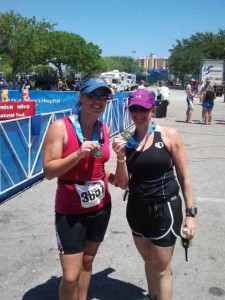 Now, the big questions: Will I do another one? Well, I kind of have to, don’t I? The swim was cut short, so I haven’t actually done the true distance! And I plan to sign up for another race sooner rather than later. You know, before all the training I’ve put in wears off. I think St. Anthony’s could end up being an annual event for me, unless my husband does it next year, in which case I’m happy to stand behind the camera and cheer him on like he did for me. (He even live Tweeted from my account! Can’t beat that!)

And, now that I’ve accomplished this goal, will I do a longer distance? Will I train for a half Ironman? Right now, I’m leaning toward yes, but probably not until next year. I know that I’ll need to carefully plan the timing—this time of year is tough due to some other commitments, so I think I might look for a 70.3 event taking place next fall. I know that, in order to finish a race of that distance, I’ll really need to amp up my running, which, if nothing else, is definitely going to be time consuming, but after finishing this, I know that if I put my mind to it, I can definitely do it. So, I reserve the right to change my mind and stick to sprint and Olympic distances, but I think the half Ironman distance might be my next big challenge.

Advice for Other Tri Newbies 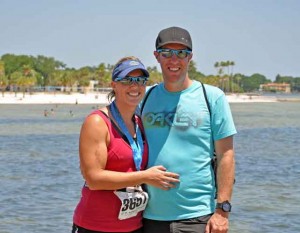 If you’re thinking about doing an Olympic distance (or longer) tri, I have a few pieces of advice for you. First, talk to someone who has some experience in that distance and, ideally, in that particular race. Be as informed as possible on things like nutrition (seriously, I never would’ve used Gu or sodium tabs or anything if my coach hadn’t insisted, and, if I hadn’t, I honestly might not have been able to finish without walking the whole run) and keeping your body temperature down, especially if the race is someplace hot. If you can get in the water for a swim the day before, do so—it’ll really help your confidence level. And, if it’s at all possible to have some familiar faces there for you, even if it’s just at the finish line, do what you can to make it happen. It made all the difference to me to see friends and family at transitions and at the end of the race. Plus, it was more fun to celebrate afterward with them than it would’ve been to collect my free beer alone!

(Oh, and also? Treat yourself to a beer or three afterward, if you’re so inclined. Nothing tastes as delicious as completely guilt-free beer.)

Do you have any favorite races you go back to year after year? Does a tough race ever inspire you to take it to another level and sign up for something longer or tougher? —Kristen