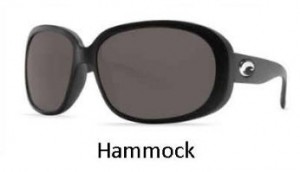 In the past, FBG Jenn and I have joked about our love/fear relationship with sport-functional sunglasses. It’s silly, yes, that only those running marathons in three hours or less are worthy of Oakley-like protection, but you have to admit that the typical fast runner’s high-performance eye-wear looks pretty bad-ass. My good friend (who happens to be one of those fast runners) ran a 5K with me last year. She put on her sunglasses and I swear, not even 5 seconds later, someone turned around and asked her if she’d like to move up to the front of the group. Her eye-wear proved her power! See!

The folks at Costa understand the average runner’s fear and created snazzy sunglasses that handle business without making you look like running IS your business. I received a pair of the Hammock-style sunglasses and was most impressed with how normal and fun they were. They’re what I like to refer to as “Hollywood-diva specs.” Here’s the groovy part, though: While they look like your usual fashion-savvy, bug-eyed sunglasses, they don’t act like typical sunnies—they act like those real runners’ performance sunglasses do. Each pair of Costa sunglasses is polarized and provides 100 percent of UV A/B/C protection.

Its patented lenses promise—and deliver—less blur and haze. And oh my goodness, are they light! They didn’t hurt my ears nor did they leave marks near my nose. They also stayed on my face, even when I was sweating. The best part though? I went running in them and didn’t feel like a poser. I was just a girl…running in front of the sun…asking her sunglasses to not jack up her run. I wasn’t disappointed.

Do you share our performance-sunglasses fear? Ready to put the fashion back in running? —Tish