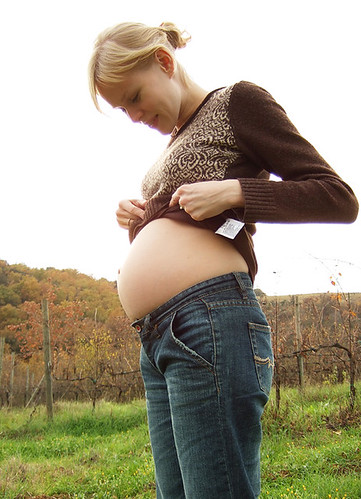 I gained 35 pounds during my pregnancy. I lost 25 of it almost immediately. But that last 10 pounds loved me. And honestly, though I wasn’t in love with them, I was quite tolerant. I swear, most of it was in my boobs anyway, and once I was able to fit back into my pre-pregnancy clothes, I wasn’t really concerned with the pounds.

But month after month ticked by and that 10 pounds didn’t budge. Not even a little. I knew most of it had to do with breastfeeding—nature’s way of making sure I had fat stores so I could feed my baby—so I resigned myself to that extra 10 pounds until I stopped nursing. But then all of a sudden at about nine months postpartum, the numbers on the scale began to drop. And I’d grown so used to seeing that extra weight on the scale that at one point I weighed myself three times in a row because I just didn’t believe the weight-loss.

The “magical” weight-loss certainly wasn’t from ramping up my exercise regimen or calorie cutting. I’m almost certain it can be attributed to my daughter’s increased solids intake and slightly decreased demand for the boob. (The boobs, sadly, are already looking less voluptuous by the day.) But whatever the reason, it’s a little weird to be at my “happy weight,” which is actually a couple of pounds over my exact pre-pregnancy weight because I was in a different sort of fitness ballpark than I am now.

And now that I’m here, what do I do? Hitting a specific-ish number on the scale certainly doesn’t mean I’m back in shape. So now the goal is to firm up, gain strength and reintroduce myself to cardio. The working out is the easy part. The hard part is making a concerted effort to take time out for myself. I’ll keep you posted! —Erin