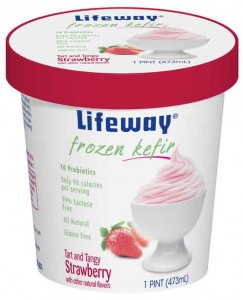 I’ll be honest. Up until a week ago I knew kefir was a health food (read: something Whole Foods loves to stock), but I wasn’t exactly sure why it was great for the ol’ bod. And thanks to Google, within minutes I was primed on why kefir is a superfood. (Seriously, how did we live before the interwebs?) Here’s the gist.

What is Kefir and Why Is It Awesome?

See? Super-duper goodness. Because most of the kefir products are in a drink/smoothie-like form—and ya’ll know how we’d rather eat than drink our calories—I’d never really considered having it regularly.

That is until I learned that it comes in ice-cream flavor.

God bless the Lifeway people, they sent me a pint of Strawberry Frozen Kefir, and I instantly became a kefir devotee. Both tart and a little tangy, it tasted like real strawberries with cream, and with just 90 calories, one gram of fat and four grams of protein in half of a cup, let’s just say that the pint didn’t last long at FBG HQ. For about $5 a pint, it’s not the cheapest ice cream I’ve ever bought, but it’s certainly the healthiest.

Move over fro-yo and make room for fro-ke! (Okay that doesn’t have the same ring to it, but it’s just as tasty!) Have you tried kefir? What did you think of it? —Jenn