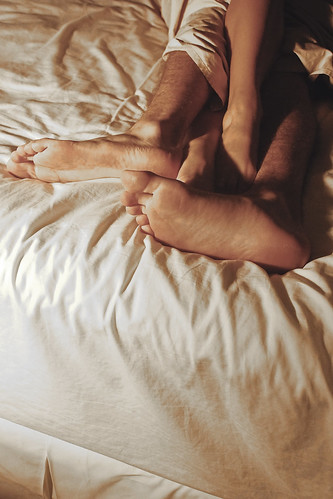 I like to work out, and I’m never one to back down from a challenge. So when my husband suggested we get our sexy on every day (of course he did) to get pregnant, I was like, “Okay, let’s do this.” And so we did.

And by about day 20 of my cycle, both of us were so freakin’ sick of sex. I never thought my husband could actually not want sex, but I was wrong. Even he, King of Thou Always Wants to Do the Dirty, was worn out after a few weeks. And gosh knows I was. So much so that by the time my ovulation-predictor sticks finally showed that I might be ovulating (right now I’m looking at an average cycle of 38 days, but that, my friends, is for another ranting post about birth control), we were both daunted with the prospect of having EVEN MORE sex.

In a matter of weeks, sexy time wasn’t so sexy, and baby-making quickly became a chore on our to-do lists rather than what it started out as: a pretty damn life-changing event. And, to me, that’s just wrong. I know plenty of couples spend months and sometimes years trying to get pregnant, and in some ways, sex kind of becomes a part-time job. But after just one month of trying, that’s just not okay with me. Actually, I’m not sure when that will ever be okay with me. Corny as it sounds, I want our future little human to be conceived out of love, not obligation with a lack of passion.

So while I’m obviously a trying-to-get-pregnant newbie and this is probably the rookiest of baby-making mistakes, we’re now rocking a less-pressured and more fun approach to the bedroom. First rule: Do it when you want to. That’s simple and fun enough. Second: Don’t obsess about perfect timing. Yes, obviously some times are more conducive than others, but as long as you’re doing it every few days, you pretty much have your bases covered (especially if you—like me—have longer cycles because it doesn’t do any good to have sex every day through cycle day 15 if you’re not ovulating until day 28). Third, unless the earth is shaking and the spirit moves you, there’s really no reason to have sex every day, let alone twice in one day. It just leads to burn out (for us, at least). Fourth and perhaps the most important of all? Put effort into it. Go on dates, flirt shamelessly, get your foreplay on, make-out like teenagers—basically, be totally present.

As best I see it, you only have one time period in your life when you’re trying to conceive your first child, so why not have a really fun go at it?