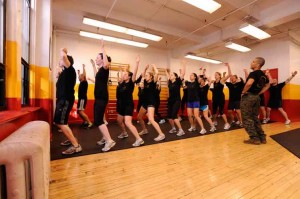 Because there is so much fun stuff going on in New York City when it comes to fitness (and because Erin has a super-cute little one at home making traversing the Big Apple at a moment’s notice a touch more complicated), FBG has added Raquel Guss as our “New York correspondent.”  Below Raquel goes On the Scene to try a new class called Warrior Fitness Boot Camp! —Jenn

After a Warrior Fitness Boot Camp class in New York City, I came out chanting, “The one, the only, the Marines!”

Okay, that goes a little far, but the experience and workout I just had was more than I ever expected. With my two Marine instructors, Ruben and Alex, I was expecting difficult hard-asses (oops, my language!) yelling, screaming and hundreds of push-ups—I mean, the Marines are stereotyped as “killing machines” and have one of the toughest and most demanding recruit-training programs among the branches. 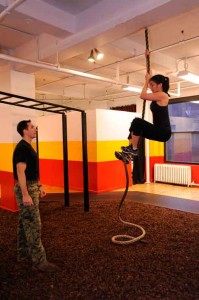 However, I faced my fears and brought my close friend and roommate, Anna, to take on the challenge with me. (There’s power in numbers!) We came half an hour early and watched the class before us finish up. Round and round the mini-track they went, which surrounded an obstacle course that looked like a playground for adults. It had a rope to the ceiling, walls of various heights to jump, hop, mount or somehow get over and monkey bars! When was the last time you were on MONKEY BARS? In the third grade? How cool is that? Almost as cool as the flights of stairs we had to run up. (Kidding!)

It was 7:30 in the morning and we hustled into formation for our boot camp class. Stacked in three straight lines for stretches: “To the right!” Ruben yelled. “To the left!” Then, two lines for jumping jacks: “One, two, three, ONE. One, two, three, TWO” we yelled in unison. Since when did three reps only count for one? Finally, after 50 sets of three jumping jacks, we were off to do five laps around the track. As I came around the mini-track for my last lap, I noticed Ruben holding a door open. Each person disappeared, one after the next, and when it came my turn to find out what was behind this mysterious door—I found stairs. Go figure. 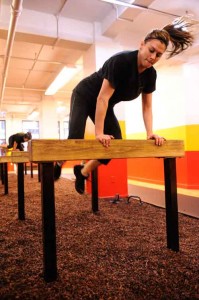 We climbed up the eight flights of the dimly lit staircase, then 10, then 12. The echoing of voices bounced off the walls, and one girl yelled out “Good job!” as she hurried down the stairs. Another said, “You can do it, you’re almost there!” With the words of encouragement amongst fellow “warriors” as each member conquered the stairs at their own pace, I couldn’t help but notice that this class wasn’t just for individuals, but it was a diverse and supportive team. It didn’t matter if you were the first or last one down the stairs because everyone would get a “nice job” and would continue on to the next grueling task. Sorry, no breaks.

We did a total of three sets of track sprints and stair runs, and then the group split into two. Half the group went on to do weight training with Alex, while the others (including Anna and me) did the obstacle course and partner circuits. The obstacle course was probably the most exciting part, not just because of the awesome monkey bars, but the accomplishment I felt as I went over every wall. Each one progressively got taller, and I remember getting to the 7-foot wall and thinking, “Hell NO!” I could barely reach the top with my hands, let alone jump and pull myself up. With a little coaching and encouragement though, I made it over, and the sense of accomplishment kept me motivated all day. We finished up with group jumping jacks, push-ups and planks.

I realized in this class that I can do things that I thought were impossible. For that hour, we were all warriors, and the grueling hour was worth the sweat and (internal) tears. I may not be a Marine, but I am Warrior Raquel!

Have you ever done a class you thought impossible? Tell us about it! —Raquel