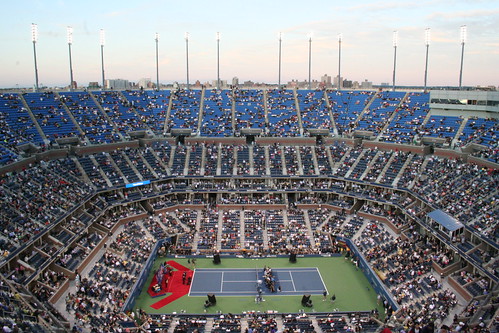 With the U.S. Open 2011 tournament set to start on Monday, the inner tennis player in me is squealing in delight! (Like louder than Venus Williams when she hits the ball.) If you’re as psyched as I am, here are three ways to tennis it up until the U.S. Open 2011 matches actually start!

1. Go play, silly! This might be the most obvious way to get ready for the U.S. Open, but get out there and hit the yellow fuzzy thing around! Don’t have anyone to hit with? No worries! Jump on Juump, an online site that helps people find people to play with and courts to play on, and you’ll be hitting like a U.S. Open player in no time (at least in your head).

3. Work out like you’re in the U.S. Open. Pro tennis players don’t just train on the court—they train in the gym. Check out these great tennis-workout moves by Shape magazine to start working out like your favorite U.S. Open tennis player.

On Monday, look for more fun U.S. Open tennis content on the site, including an apparel review! Because, tennis dresses are just too darn cute not to review. —Jenn