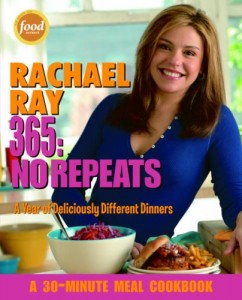 I had a thing for Rachael Ray back in the day. When she first came on the Food Network she was fun, entertaining and very personable. She seemed, and still seems today, like someone you could sit down and have a fabulous meal with. Episode after episode, she’d show me how to make restaurant-quality “healthful” dishes in 30 minutes or less. After watching her cooking show for about a year, I purchased one of her cookbooks and made a few of the recipes. To quote dear Rach, they were “yum-o!”

Then I became curious. Exactly how many calories were in that seemingly healthy Rachael Ray recipe for Indian Tofu and Spinach over Almond Rice (Rachael Ray: 365: No Repeats, page 156) that I’d made five or six times? After doing the math, I calculated that there were, in fact, more than 1,000 calories in each serving.

Until now. After some time away from RR (which has been pretty darn tricky with her magazine and talk show everywhere), I’ve decided to give her another go. And, I’ve found that you can easily adapt any recipe that Rach can throw at you—no matter how fried, EVOOed or cheesy it is.

1. Don’t follow the serving size. Most of RR’s recipes claim that they serve four, but the portions are beyond enormous, so feel free to cut the recipes in half or be prepared to feed an army. At one point, I made her salsa stoup (Rachael Ray: 365: No Repeats, page 22), and after four days of eating it for lunch and dinner, I still had some left. I still don’t want to eat that damn soup again.

2. Share the love. Invite over a few friends or your local Little League team after a tourney and give them some good old-fashioned 30-minute meal cooking. Erin and I have been known to split a healthy Rachael Ray recipe or two, so that we can actually enjoy it, not force it down on day five so that we don’t feel guilt about starving children in third-world countries.

3. Make the usual subs. This is a no-brainer. When you see full-fat anything, sub in the low-fat or non-fat version. Also switch out any red meat for lean ground turkey, chicken, fish or tofu when you can. Your fit bottom will thank you.

4. Half it your way. RR is very generous with the following ingredients: olive oil, cheese, nuts and bacon. In most instances you can reduce the amount of these goodies by at least one-third if not a full half.

5. Add the good stuff. Ms. Ray is pretty good about using fruits and veggies in her dishes, but you can never have too many. Get creative and add your favorite produce. Veggies=yum-o for real-o!

After implementing these tips, I was able to get my Indian Tofu and Spinach over Almond Rice down to 400 calories a dish. And, Mr. Fit Bottomed Girl didn’t even notice. Ha!

How have you made Rachael Ray’s recipes more health conscious? Tell us in the comments, yo! —Jenn

Add a comment Cancel reply
23 Comments
Jenn & Kristen
Diets don‘t work. We know because we‘ve been there.
Get the deets
STAY IN THE KNOW
When new stuff happens, you'll be the first to know!
Latest Offer
Working out at home
Get free strength, cardio, yoga, and meditation videos.
Try them
Podcast
Podcast Ep 137: That’s a Wrap!
Instagram Feed
X