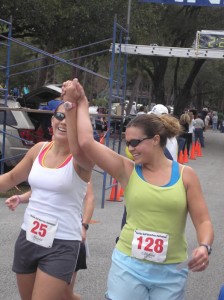 FBG Kristen and her BFF, Jami. Friendship and accountability for the win!

Nobody likes a DNF—Did Not Finish—in a race. Especially one you’ve trained really, really hard for. I haven’t had that happen to me yet, but as I continue to push myself and sign up for longer races, I know it’s a real possibility. Between equipment malfunctions, extreme heat and the enormous number of possible injuries one could sustain, there’s a decent chance that one day, I’ll start a race and have to pull out before I cross that finish line.

But there’s another reason one might not finish a long-anticipated race, and this one, I’m guilty of—the DNS, or Did Not Start. My friend Heather Barmore wrote about her DNS experience over at Curvy Girl Guide, admitting that, over the past three years, she’s signed up for three half marathons…and although she’s trained hard, she hasn’t gone to any of them.

I can relate—a year and a half ago, I was signed up for a 15K. I trained really, really hard all winter for it. I completed all my long training runs and even worked some 6- and 7-milers in during the week, which has historically been a challenge for me. But, come race day, I ended up running the 5K. Additionally, just this summer, I was signed up for a sprint triathlon in June. I totally bailed.

Heather always had great excuses for ditching her races; namely, work, although she readily says that she fully allowed work to become an excuse because it was easier than admitting she was afraid of failing. My excuses were a little weaker, mainly revolving around travel plans changing and the logistics of getting to the race becoming a bit muddied. And, to be honest, I just wasn’t excited for them, which is a huge bummer—I love getting super geeked for a big race. But was there an element of fear, and of worrying that I wouldn’t finish in a time that made me happy? Of course.

But you know what? Turns out, on both occasions I felt waaaay crappier about not doing the race I’d planned than I would have if I’d participated, even if I’d been among the last people in. Finishing a race feels good. Finishing a race you’ve really, really trained for feels awesome. It’s all too easy to forget how fantastic that feels, but maybe that’s why this community is so great—we get to remind each other exactly how good it feels and encourage each other to keep pushing. Sometimes you have to push hard to get to the finish line, but sometimes you have to push even harder to get to the start.

Have you ever skipped a race you’d signed up for? How do you keep yourself motivated to follow through on a race you’re training for? —Kristen

Add a comment Cancel reply
5 Comments
Just for You
Working out at home
Get free strength, cardio, yoga, and meditation videos.
Try them
STAY IN THE KNOW
When new stuff happens, you'll be the first to know!
About Us
Jenn and Kristen are passionate about letting women know they're more than a number on the scale.
Get the deets
Instagram
X