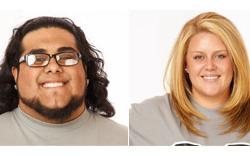 *SPOILER ALERT* This post reveals details from last night’s The Biggest Loser 12 episode. So if you don’t want to know the dramatic details and results, click away, my friend, click away!

It was Halloween week on The Biggest Loser 12, and let’s just say it was scary. Well, only parts of it were scary, but I’m getting ahead of myself…

First, awesome costumes. Ali Sweeney as Frankenstein’s Bride rocked, and the three trainers as the Three Musketeers was pretty darn rad (even if it seemed a touch promotional for that terrible-looking remake coming out). Second, fun spooky challenges. Collecting apples in a scary maze? Sounds kind of lame, but was actually one of the most nerve-wracking challenges this season. And the Halloween-candy temptation was both realistic (how many of us are resisting Halloween candy in our homes right now?!) and hilarious—especially when the black team tricked Bob into thinking they had eaten it all. Apparently I love Bob happy, emotional and angry. So, I guess I love him all the time. Third, Ramon drops the L-word on Jessica, and they genuinely seem to be digging on each other. Ah, Biggest Loser love.

Now, let’s get to the scary stuff. Anna Kournikova, whom I’ve liked all season, took it pretty hard to the lovebirds and questioned their ability to focus while smitten with each other. While it seems like we’re only getting an itty bitty part of a much bigger story, it seemed pretty harsh to me. But the scariest part of the night was the weigh-in and player elimination. With numbers more like week two than week six—and Sunny gaining FIVE pounds—there was speculation on Twitter that the weigh-in was thrown. And in the end, after more drama involving a rather heated discussion between Vinny and Jennifer, Jennifer went home. Whether or not the weigh-in was thrown, it’s easy to see that game play is in full effect.

For more on last night’s episode, check out The Biggest Loser 12 episode six recap video below by Courtney Crozier (love her!) from BL season 11!

What did you think about last night’s episode? Do you think the weigh-in was thrown? Happy with who went home? —Jenn