We’re talking hydration over the next few weeks on Fit Bottomed Girls with our new Thirsty Thursday series. But because hydration is so important to moms and families alike, we’ve also got some good, wet, watery fun for you here, too. This series is sponsored by alkaStream and will focus on water, hydration and health. For our sponsored-post policy, click here. 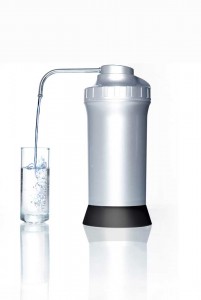 When my husband and I bought our house almost two years ago, we were excited about the extra bedrooms, deck and fenced-in backyard for the dog. But we were also pretty pumped about the under-sink water filtration that was already installed. I’ve been dedicated to tapping into that water instead of the tap, even if after almost two years we’ve never even looked at the system or changed the filter. One bonus to testing out the alkaStream system besides the tasty water? Not having to figure the old system out.

Unlike Jenn who has the alkaStream system installed on her countertop, because I already had a system under our sink, my husband was able to install the alkaStream system to replace it. Because I was already a dedicated filtered water drinker, the slow flow of the water—it probably takes twice as long to fill a coffee pot compared to the tap water—didn’t faze me. And the taste? In my opinion, well worth the added time.

As I’ve mentioned previously, this first trimester of my pregnancy has been…well, cruel. One of the weird annoyances (other than the vomiting) has been that I’ve been both thirsty beyond belief and gag-a-rific when drinking water. Once I got my alkaStream going, I felt way more hydrated without the gagging. Yay for no longer choking down the necessity that is water! Now, my morning sickness miraculously started to ease at week 13, just a few days before starting to drink the new filtered water. So I can’t say that it scared the nausea monster away. But I can say that I’ll take all the hydration help I can get, and the tasty water has me drinking more than usual.

A couple other notables? My husband, a total water hater, made an unsolicited remark that it tasted like good, clean water with the good stuff left in. My daughter? Well, she drinks it here and there, but I don’t think the fact that she throws the sippy cup across the room should be taken as criticism. She’s known to throw all sorts of deliciousness—and I think she’d throw a table if she could.

Don’t just take my water word for it. Go check out what Jenn thinks of the water—and how it’s helping her hydrate and even kick butt at workouts. Ah, the power of H20!

And be sure to stay tuned to our Thirsty Thursdays next week over on Fit Bottomed Girls for details on winning a system yourself—worth $329! Bottoms up! —Erin