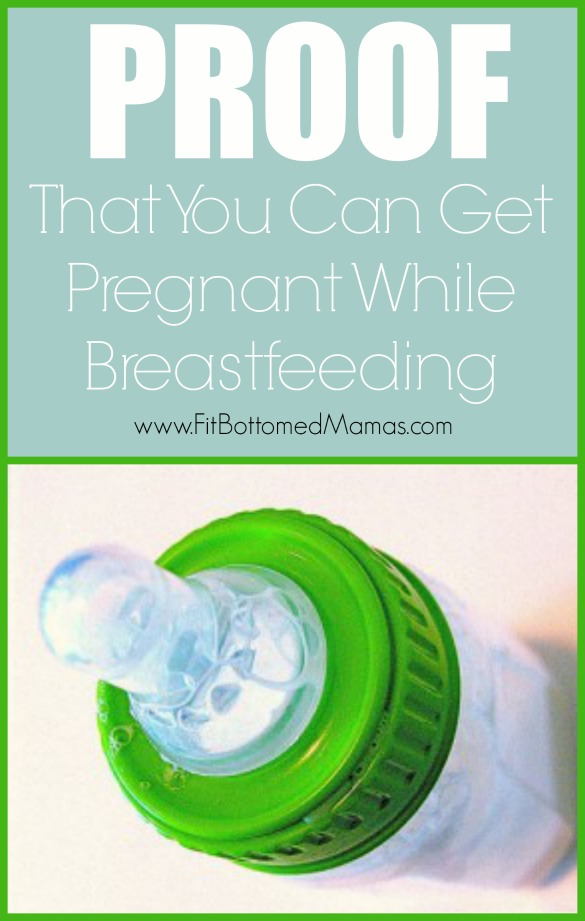 It’s a common misconception (ha) that you can’t get pregnant while breastfeeding. I’m living proof that it is indeed possible.

Breastfeeding is actually an excellent form of birth control up to a point. According to my go-to breastfeeding info site, kellymom.com, breastfeeding is 98 to 99.5 percent effective—as good and better than perfect condom use—provided that 1) your kiddo is less than 6 months old 2) your cycle hasn’t yet returned and 3) your baby is feeding on cue and gets almost nothing but breast milk.

At 10 or so months old, my daughter was still nursing at least once a night and fairly frequently during the day. This was apparently keeping Aunt Flo at bay. And while it’s lovely not to have a period in forever, when you’re starting to think about baby No. 2, you find yourself wishing your body would kick into gear.

I was determined to hit at least 12 months of breastfeeding my daughter, so I wasn’t about to wean just so I could try to get pregnant again. I’d read that nursing frequency and the total amount of time spent nursing are important factors regarding the return of fertility, so I started playing around with how often I’d nurse. I shortened some of the overnight sessions that were purely for comfort (and frankly more for me getting her back to sleep as quickly as possible) and started pumping so I’d have stored milk and could go longer between daytime feeds. (Props to pumping moms—I’m in awe of you.)

Whatever tweaking I did worked. I got a migraine—a fun indication of my body’s hormones doing something—and started noticing signs of fertility. Because I hadn’t had a period and wasn’t using birth control, I’d stocked up on “internet cheapies”—inexpensive pregnancy tests you can buy online. These, by the way, are the best kept secret. They are INSANELY cheaper than drugstore tests and are still really sensitive. So if you want to test obsessively, this is the way to go. Then if you really want that digital test, you can do it after you test positive on a cheapie and not waste your money on a negative.

I was testing every few weeks so that I wouldn’t end up on one of those I Didn’t Know I Was Pregnant shows, and lo and behold, one test came up positive. I was shocked. Both because I expected to have to try for months to get pregnant again and because I couldn’t believe that messing with my breastfeeding schedule was enough to kick start my body.

If I hadn’t gotten pregnant, I have no idea whether my body would have returned to regularly scheduled fertility or if my cycles would have been wonky for awhile until I weaned. But I was really glad that I didn’t have to shortchange my firstborn to start working on my second—she continued breastfeeding until about 13.5 months.

The one interesting thing about getting pregnant without regular cycles is that you have no idea how far along you are. Doctors get a bit flustered when you tell them you haven’t had a period in almost a year. But you do get a couple of extra ultrasounds to date the pregnancy. And I wasn’t about to complain at extra peeks at my baby!

Did you get pregnant while breastfeeding? How old was your bambino when it happened? —Erin