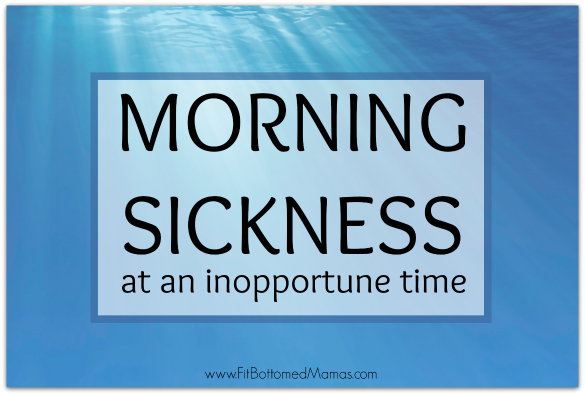 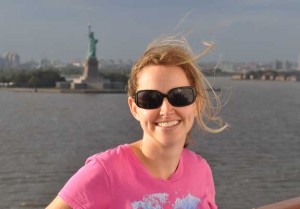 Little did I know that I would soon feel as green as Lady Liberty.

I went on a cruise with family in September, near the height of my morning sickness. I wasn’t apprehensive about going on a cruise while battling bouts of morning sickness. Which is surprising because I’m the type who gets carsick on winding roads. Who pops a Dramamine when going on a 3-hour whale-watching trip because I’d rather deal with the guaranteed-sleepy of a pill than the possible-vomitty of seasickness. So it’s a bit funny that the cruise didn’t have me rattled, especially because I didn’t check with my doctor to okay the use of Dramamine, and had it been okayed I’m the type who chooses to “tough it out” rather than pop a pill when pregnant unless absolutely necessary. So I bought some Sea Bands, which I didn’t even use. Cruises are leisure. Smooth sailing over smooth waters. And I was totally fine for the first four days, morning sickness and all. One minor dry heave when the boat lurched while I was in the bathroom, par for my morning course.

The first four days: I was a rockstar seawoman. I started thinking of joining the Navy. Writing Bridget Jones-isms in my head like: I am stud pregnant woman who can deal with open water; must look into buying fishing boat.

And then Day 5 happened.

We woke up during the night to drawers opening and closing. No, our stateroom wasn’t haunted. Or actually, it was haunted. By a little hurricane named Katia. We remained in the grip of the storm for an eternity. An eternity that made it look like everyone on the boat was drunk, stumbling around, trying not to vomit all over the place. And some people failed in their attempts to hold their vomit. I am one of those people. Here is my story.

Wanting to take advantage of the kids’ playroom, which weirdly limits the times kids under 2 can spend in there, we headed up for a couple of hours of crawling mania and toys that weren’t books. The attendant commented on the rocking, saying that because the room was at one of the highest points of the boat, you really feel the boat sway. I almost told him I didn’t know what he was talking about; I could barely feel it as we were practically flung back and forth as the boat pitched. I don’t know how my daughter could even crawl straight.

Avery had a blast. Made friends with another little girl and adorably crawled through a caterpillar. I was fine. Still thinking of captaining a boat some day. Until everything changed. All of a sudden, I stood up, left my daughter where she was and headed in my husband’s direction. “We have to go.” And then I put two toys away. Maybe mumbled “Uh oh” and high-tailed it to the bathroom.

I managed to hit the toilet, eventually, after hitting the diaper pail and oh, the floor. It seemed fitting to puke all over a room that I’m sure has seen its share of puke before. I then had to clean my mess up, which was about as fun as creating it had been. I blew off my husband’s offers of help; I love him for the offer, and I love him enough not to do that to him. He also explained that I was pregnant to the attendant, whom I hope was relieved at the extensive cleaning I had done, even if he would have to restock the non-absorbent paper towels.

I think I was one of the lucky ones who actually made it to a bathroom, kind of. I got the impression that others weren’t as fortunate, as I saw what looked like moist, freshly carpet-cleaned areas throughout the ship the entire day. I felt a ton better after my episode though, and didn’t have another incident the rest of the day. I did, however, carry a barf bag around, just in case.

Have you ever had an incident with morning sickness at an inopportune time? Do tell! —Erin