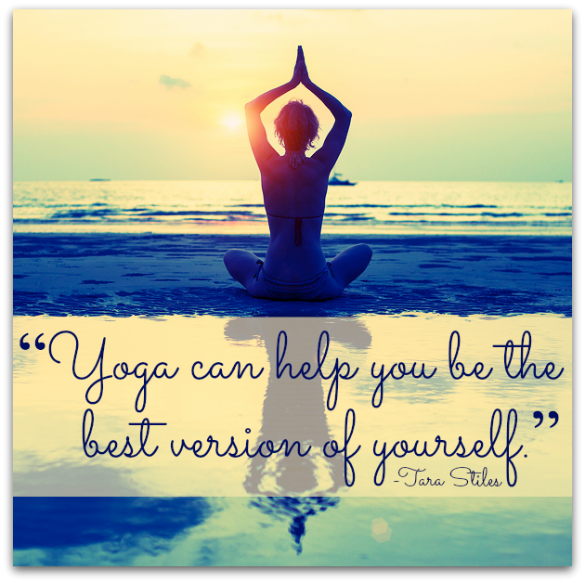 Because there is so much fun stuff going on in New York City when it comes to fitness (and because Erin has a super-cute little one at home making traversing the Big Apple a touch more complicated), FBG has added Raquel Guss as our “New York correspondent.” Below Raquel goes On the Scene to cover a yoga class that was part of a weekend-long NYC Marathon event sponsored by Nissan Leaf (oh, how we want one!). —Jenn 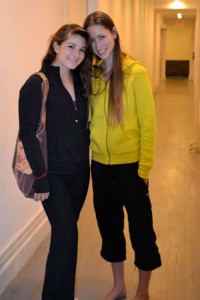 I sometimes wish I knew the exact recipe for happiness, or even the key to unlock all of my potential. As life comes full with surprises and unexpected daily stresses, it’s easy to think I took a wrong turn on a one-way street. But to Tara Stiles, the founder of Strala Yoga, all you need to do is lead your own adventure. I wasn’t 100 percent sure what that meant, so I took a left turn and learned how to, as Tara would say, “find my ease” at Strala Studio.

I arrived at the studio in NoHo (North of Houston Street) for the Relax yoga class for some stretching. Hoping to experience Tara’s yoga class first-hand, I walked into a vast, dimly-lit room, where the only decorations were four hanging paper lanterns. I wove through the yoga mats and found a place in the second row and waited for class to begin. Surrounded by plain white walls, I couldn’t help but think about how beautiful the studio’s simplicity was. White walls, canvas or even blank sheets of paper have a way of promoting creativity and allowing for personal expression, and apparently Strala had the same idea. Tara explained it as one of the tools to help keep an open mind and cultivate oneself without restrictions.

Trying to understand the idea of cultivation, I started moving this way and that, until Michael, Tara’s yogi husband, announced he’d be teaching the class. (It’s okay, Tara and I hung out afterwards.) Tara had gotten stuck in Staten Island while working on pre-marathon videos with actor Ryan Reynolds and runner Ryan Hall. I heard a few girls swoon at the thought. I mean, who wouldn’t want to be stuck with Ryan Reynolds? But getting back to cultivating myself, I brought my focus in and started to breathe. 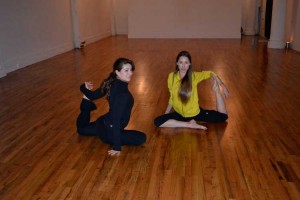 Class began with a few deep breaths, moving into hands and knees softly planted on the floor. One move flowed right into the next and no yoga pose had a name. There was no Sanskrit to learn, no Utthita Trikonsana or Adho Mukha Svanasana. Just easy descriptions of what the pose looked like. A forward lunge turned into a twist, and then next thing I knew I was in “triangle pose.” In this class, every student was pushed to make the class personal and listen to his or her own body (very FBG!). The guy to the right of me was in a deep lunge, elbows on the floor slightly rocking, while the girl to the left stayed as still as a statue. To Tara and the “guides” of Strala studio, yoga encourages you to listen to yourself. No matter how scary it is, it’s all about listening so you can guide your body and your life the way you’re supposed to.

With each inhale you make more room, and with each exhale you allow your body to move forward physically and mentally. Michael often repeated, “Move like you love yourself.” As I took notice of every muscle and tendon, I started to make the class my own, everything I needed—I began to find my ease. “Finding your ease” is Tara’s personal mantra, and it encourages us all to be more efficient and access our creativity. It’s the creativity that allows each of us to excel in every aspect of our lives, including finding the right stretch to release unwanted tension or even take the left turn because you know you it’s the right decision for you.

Tara clarifies that finding your ease doesn’t only come from doing yoga. Recently, while shooting footage for the marathon she got the opportunity to hang out with Ryan Hall, the fastest American runner and found that running does the same for him as yoga does for her. “It’s personal for everyone,” she says. For many, “Yoga can help you be the best version of yourself.”

Class too soon came to an end, and I found myself revived, positive and open. Tara and I caught up after class and played with some of our favorite poses—mine, lunge with a twist, and hers, the pigeon pose, as you’ll see in the photos above.

Be sure to check in over the next few weeks to hear more of my experiences from the Nissan Leaf’s NYC Marathon weekend event! In the meantime, tell me—does yoga help you find your ease? —Raquel