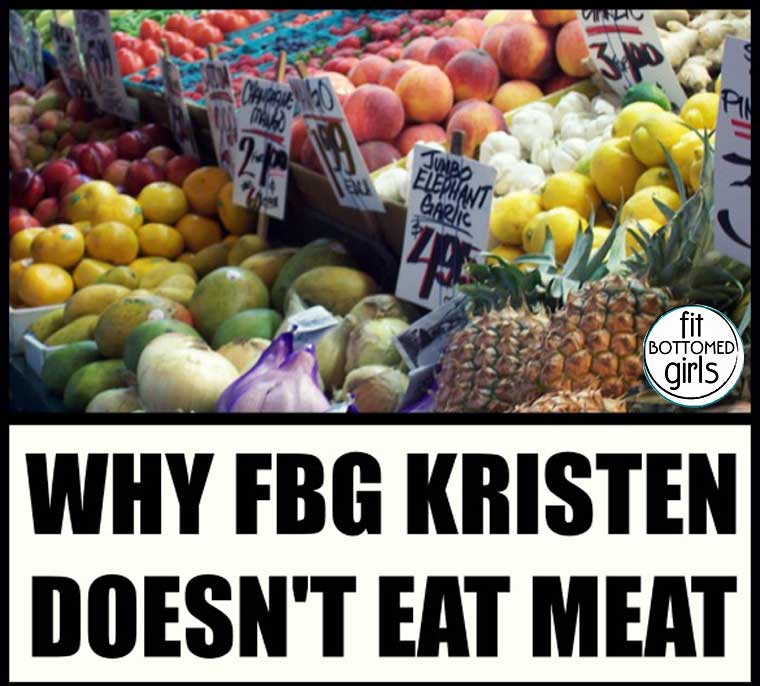 As a high school senior, I interviewed the teachers who had taught kindergarten to the kids in my class, and when I spoke to my old teacher, Mrs. Lake, she actually remembered a story about me. We were singing all the verses of She’ll Be Coming ‘Round the Mountain, and, when it got to the verse that says, “We will kill the old red rooster when she comes,” I raised my hand and asked, “Couldn’t they just order a pizza?”

It appears my interest in going veg began pretty early.

In fact, my mom tells me that I loved the fruit and veggie baby food, but she had a hard time getting me to eat any of the meat. So, really, when I cut all meat but seafood (a decent percentage of which is actually caught by my parents or husband) out of my diet, it was far from a surprise.

My Reasons for Going Vegetarian

I have a number of reasons for my choice to be pescatarian. First of all, I’m a huge animal lover. As in, borderline-crazy dog-lady. (Emphasis on borderline.) And it’s difficult for me to reconcile eating animals that have been kept in inhumane conditions (which, let’s be honest, is how the majority of the animals many of us eat are raised) with that passion. It just doesn’t feel right.

Plus, I don’t actually like it—I liked how chicken was prepared more than the chicken itself. Chicken salad is one of the few things I truly miss—and I have to admit that I did enjoy a good, medium-rare prime rib once upon a time, but other than that, I never had a meat craving in my life. So, all it took was a slight kick in the pants to make the switch from not-a-lot-of-meat to meatless.

The big decision actually came in the middle of a drumstick. My husband and I had gone to the supermarket and picked up a few pieces of fried chicken—like I said, I enjoyed some of the ways chicken was prepared. I’d eaten one piece and was on my second, and that’s when I saw it. A feather. A white, chicken-y feather. And when you see a feather sticking out of your fried chicken, two things go through your mind. One: Gross. And two: Holy crap, this was an actual chicken. There’s no disassociating the food from the animal at that point.

It just so happened that, in flipping through the channels that night, I saw a special on factory farming and the way a major fried-chicken chain treated the chickens it served, and I was horrified. Between those two things, I decided that eating meat was no longer the right thing for me. 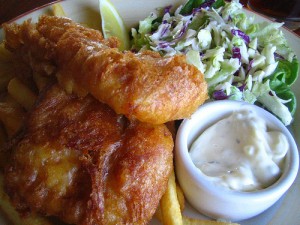 I try to avoid this kind of fish though… Credit: rick

Why I’m a Pescatarian

So, why did I stick with seafood, you ask? Also a couple of reasons. First and foremost, my parents fish. A lot. My dad actually owned a store that sold fishing equipment and boats and motors, and every vacation we took involved fishing. Just like it didn’t feel right to continue eating chicken, it didn’t feel right to stop eating fish when it was such a big part of my life, especially when I knew that most of the fish I was eating was caught in a sustainable and ethical manner. When I order or purchase seafood, I make a real effort to find the more sustainable and ethical options (although I’m not about to say I’m perfect—I don’t consult my Monterey Bay Aquarium handbook before every purchase).

The second reason is that, because I’m so active, I know I need plenty of protein. I know it’s entirely possible to get everything I need from plants, beans, nuts, eggs and dairy. But, throwing fish into the mix makes it easier.

Now, with all these strong feelings, you might be wondering why I haven’t gone vegan. I have to admit I’ve given it some thought, but the thing is that being a pescatarian is pretty much effortless for me—it feels like I’m eating the way I should be eating. My husband, who is not a pescatarian, vegetarian or anything of the sort, has really adapted so that we now eat many of the same veg meals (sometimes with a quick addition of some chicken at the end for his dish), and some of those meals are actually vegan, but cutting out all animal products would make eating together really difficult, and shared meals is an important part of our relationship. I won’t sacrifice that.

Since this is already pretty much a novel, let me briefly mention that I don’t know if  I will always eat this way. I’m big on listening to my body, and, if someday my body starts screaming, “Yo, gimme a steak!” then that’s what I’ll do. After I stuff myself with other forms of protein to make sure it’s not just a random craving, that is.

Are there any vegetarians or pescatarians out there? What made you decide to cut out meat? —Kristen

Add a comment Cancel reply
14 Comments
Jenn & Kristen
Diets don‘t work. We know because we‘ve been there.
Get the deets
STAY IN THE KNOW
When new stuff happens, you'll be the first to know!
Latest Offer
Working out at home
Get free strength, cardio, yoga, and meditation videos.
Try them
Podcast
Podcast Ep 137: That’s a Wrap!
Instagram Feed
X