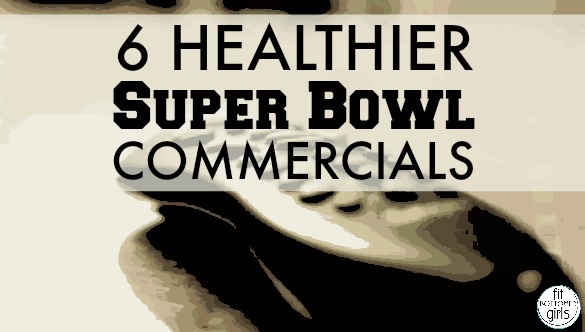 Whether or not you’re into football, the Super Bowl is a pretty good time. From the parties (friends!) to the eats (which, yes, can be healthy!) to the half-time show (we’re so curious to see what outrageous thing Madonna does this year…), there’s plenty of entertainment. And even if that doesn’t tickle your fancy (man, that phrase sounds dirty), the Super Bowl commercials are always fun. Although…they’re usually not exactly healthy.

You might get an inspiring Nike ad or some Under Armour coolness, but mostly it’s just commercials for Doritos, pizza and beer. Read on for six Super Bowl commercials that we’d like to see this year that are a bit better for our nation’s collective health. Yes, we know running a Super Bowl commercial is insanely expensive so this isn’t exactly logical, but an FBG can dream, right?

1. Anything with fruits and veggies. How refreshing would it be to see apples or spinach or even kale promoted during the Super Bowl? Maybe even a green smoothie? Oh, how we delight in that idea!

2. A deep-breath break. Although Super Bowl parties are fun, we can all certainly use 30 seconds or so to slow down and do some deep breathing. What if one Super Bowl commercial was a big group mini-meditation? Oh, how the hippity-dippity in me rejoices at the mention!

3. A quick Super Bowl commercial workout. Now this would have to be one of those longer commercials, but how about a couple minutes for everyone to stand up, do some jumping jacks, squats and planks? Baseball has the 7th-inning stretch, so why can’t the Super Bowl have something to get you up and off the couch?

4. A health pep talk. Besides just telling people to eat better and to move more, we’d also like to see a Super Bowl commercial that addressed the mental side of being healthy. A one-minute pep talk that tells everyone that they can—and that they deserve—to take care of themselves would be pretty awesome.

5. Drink more water. While there’s no doubt that I’ll be having a couple of beers on Sunday, that doesn’t mean that my only liquid consumption for the day should be beer. A quick commercial that reminds people to drink some water regularly (even if it’s just between beers—that helps!) or fun ways to spice up plain water would be so cool to see.

6. Hunger intervention. Hey there, Super Bowl watchers! Are you really listening to your hunger? Are you full but keep eating? Are you eating mindlessly? Are you really enjoying every bite? A commercial that reminded everyone to slow down, savor their food and listen to their hunger would be a—pardon the pun—a touchdown in our playbook.

What healthy Super Bowl commercial ideas would you add to this list? —Jenn