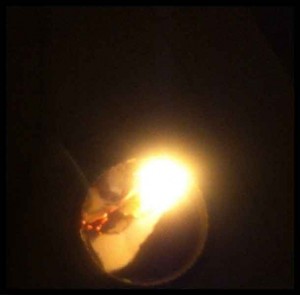 Setting intentions and then releasing them for 2012...

It’s pretty awesome having the kind of friends and bosses who are always trying to find ways to improve and honor themselves. Jenn is one of those girls (as you all have probably determined by now). A couple of weeks ago, she sent me this vlog by Gabby Bernstein, and I became a bit obsessed with the idea of setting intentions, writing them down for the New Year and then burning them. So that’s exactly what my boyfriend Mark and I did.

New Year’s Eve night we sat down in our living room and spent some time thinking about what we really intended for our year. This is the truly hard part. Doesn’t it seem like we get caught up in what others have offered up for their resolutions? The popular ones like losing weight and quitting smoking are all fine and dandy, but I don’t smoke and losing weight is never where my heart has been. I want to be fit for sure, but I saved those kinds of goals for the Question of the Week (you’ll see mine next Friday). But intentions are a whole other beautiful beast. Setting intentions has the power to work out our spirits.

One of my intentions was to cultivate empathy and an even better understanding of my friends. Friendship is one of my sacred cows, so I’ll always burn an intention for the betterment of those people in my life who I think are worth honoring.

After midnight, Mark gathered his 10 and I my four, and we huddled around a safe place and burned those beautiful intentions…leaving them for the universe to take care. It was actually pretty emotional. We had a sweet moment, champagne in hands and the sweet swell of purpose floating around us.

It’s not too late for you to do the same! Are you setting any intentions for the New Year? Any intentions that your resolutions list may have overlooked? —Tish