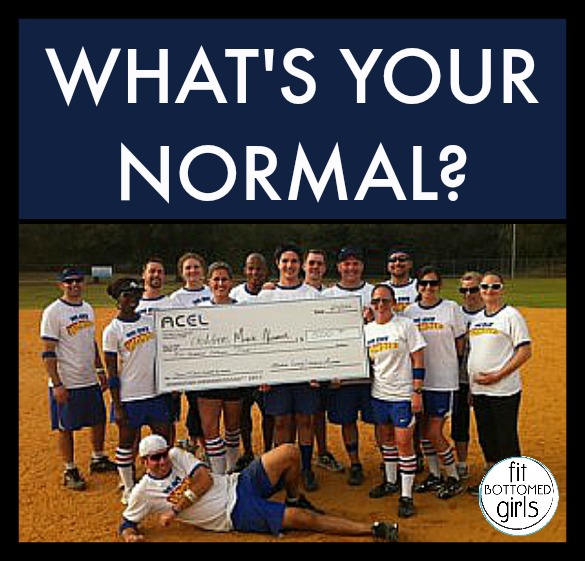 Nothing like a little charity kickball tournament on a day off. See, that’s what happens when you surround yourself with fit and active people!

We’re a couple of months into the New Year and our resolutions have either become habit or given way to our old ways, and it’s gotten me thinking a lot about what’s “normal.” And not just what my normal is, but why that’s my normal and how much control I have over it. See what I mean? No? Okay, let me explain.

A few years ago, it was normal for me to do a 5K now and again. Running more than three or four miles at a time was a major undertaking, and riding a bike for an hour or two? Unheard of, not only for me, but also for pretty much everyone in my life. Most of my friends were fairly fit and healthy, but many of them were as likely to enter a competitive-eating competition as a race.

These days, a number of the people I hang out with put my athletic accomplishments to shame. Having never done a marathon actually puts me in the minority, and I know loads of people who have completed Ironmans, and many who race shorter distances very competitively. As in, they race to win. That being said, they also like to relax and have a good time—they might get up and run 20 miles before work, but they’re also happy to meet you for a beer or three come quitting time, and I think that’s why we all work so well together. I’m betting that balance of exercise and fun is also why I can see those serious athletic feats as normal, you know?

How My Crew Has Changed My Normal

There’s no doubt about it—this makes me look at what I do differently. When I was training for my recent half marathon, I was never at a loss for training partners because there are so many people around me who consider running 10 miles on a Saturday morning a fun start to the weekend. I don’t think I came across a single person who doubted me—in fact, it was more common for people in my running group to ask me if I was using this to prepare for a full marathon. (Answer: Oh hell no. NO.) When, during a post-run beer with my Thursday night running group, I mentioned the possibility of a half Ironman, multiple people pulled out their phones to look at available races so they could join me. Yes, really, just like that.

Yet, when I talk to some of my other friends who don’t live nearby, they’re seriously impressed. And, in many cases, they’re seriously jealous. They realize, just as I do, that a major reason I do all these races and training is because I’m surrounded by people who push and encourage me just by being who they are. It leads me to wonder, if my circle of friends included less active people, would I follow suit?

There is plenty of research out there that says you eat like your friends and that obesity spreads, and I can totally see that. I hardly ever say no to sharing a pizza or having another glass of wine if someone else suggests it, so if I spent all my time around people who ate a lot of pizza and drank a lot of wine and never worked out, would that affect my health? No doubt!

Your Normal Is Your Choice

But I also think we have a lot of control over who we surround ourselves with. I have a number of friends who are not necessarily athletic or super active, but in those cases, they’re certainly health-conscious. And when it comes to bringing new people into my social group, I look for people with whom I have things in common. Because health and fitness is a major part of my life, it stands to reason that this is something I often find in common with new friends.

This brings me back to the title of this post—what is your normal? Who do you spend your time with, and how does that affect how you treat your body?

I truly believe that if you want to make real, lasting lifestyle changes rather than going on a diet or going on a two-week exercise binge, you need to make the life you want to lead your “normal.” So, how will you make that happen? —Kristen