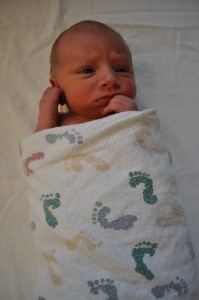 Owen, alone with his deep thoughts.

So I was planning to write how anxious I was about my pregnancy as I approached the 35-week mark—the milestone my daughter hit before her early arrival at 35 weeks. Instead, here I am announcing the birth of my second, a boy, born at 34 weeks, 6 days.

This pregnancy had me nervous from the start. As the days and weeks passed, I was both relieved and increasingly anxious. Every pang or movement I’d feel had me worried. But even with my mounting anxiety, I was convinced I’d go to term. Not to my due date, but I really hoped to make it to 37 weeks. After Avery’s stressful panic-attack-inducing NICU stay, I wanted the standard baby-in-the-room two-day hospital stay with this one.

Instead, my daughter woke me up at 6:15 on February 27 and, hoping she’d go back to sleep, I rocked and snuggled her. She was being so cute, unknowingly enjoying her last moments as an only child. While rocking her, I felt a cramp. Then another. When the third one hit, I knew it wasn’t just a fluke. I made my husband take my daughter, and I called the doctor, who suggested I lie down and keep track of the contractions to see if they subsided. When they remained steady, I started my husband on the process of getting a bag packed. With our crazy history of barely making it to the hospital the first time around, we weren’t going to stay put. We grabbed a few essentials and hit the road.

When I arrived at the hospital, I was 4 cm dilated and 100 percent effaced. The baby was definitely on the way. Sticking to my guns, I opted out of an epidural, and really, the pain was no big deal. My husband was timing my contractions and watching the monitors. He would see a contraction coming, and then I’d feel it. I had some uncomfortable ones, but they were totally manageable. By 10:15 or so, I was a 7 and still not in a ton of pain. The doctor had offered to break my water earlier, but I’d wanted to progress on my own for awhile. So I finally opted to do it to speed things along.

Me making fun of the pain. The joke was on me!

And boy, did they speed along. She told me I hadn’t progressed much past 7 as she was breaking my water. As soon as she was done, I felt an immense amount of pressure and the point of no return; this baby meant BUSINESS. It reminded me of the Charlie Bit My Finger video. Where it’s all fun and games until it really starts to hurt. Ouch, contraction, that really hurt.

I had to pee, so I managed to get to the bathroom and go. On my way back, I stopped with the worst pain. Like I had to push. I sent my husband to get someone, anyone, and got in bed. My body pretty much took over, and I was pushing as the doctor and nurses rushed back in. They were in a scramble, and I felt like no one was even paying attention to me. They didn’t have time to break down the bed. I was just pushing, and my legs were shaking out of control with nothing to brace against.

I had a moment where I wondered what on bloody earth I was thinking not getting an epidural. I remember thinking that there was just no way this was happening and that they’d better just knock me out and get the baby because I couldn’t do it. And so I told my husband I couldn’t do it. His response? “There’s the head.” And seconds later, there was Owen Matthew. A surprising 6 pounds, 13 ounces and 19.5 inches of cute baby boy.

I got to hold him for a minute exactly, and they whisked him away to check him over because he was preterm. I knew we’d get the NICU stay, and low-glucose levels confirmed it the first day. After that, we battled jaundice and finally won our freedom after six days. Having been there, done that with my daughter, it wasn’t nearly as stressful this time. Ah, the relaxation that comes with experience. Plus seeing some of the nurses was like seeing old friends.

Although we didn’t have a totally destroyed kitchen like last time, we are in the middle of a basement renovation. Contractors had just wrapped up a project the Friday before. Saturday, as we were buying paint and finalizing our carpet order, my husband and I were struck by how similar it was to Avery’s birthday, with a couple of Home Depot runs and construction going on. (Another fun fact: Panera was the last meal I had before both kiddos were born. I eat there fairly frequently but not so much that that’s not a little strange.)

Like Avery, Owen has his daddy’s chin and crazy pinky toe, his mommy’s dimples and is pretty much perfect. Unfortunately, I didn’t get that 37-week delivery I wanted. But I did get a beautiful, healthy baby boy. And as it turns out, that’s all that matters.

Did you ever doubt you could make it through the experience of childbirth? Have any medical professionals make a mad scramble for your room? —Erin