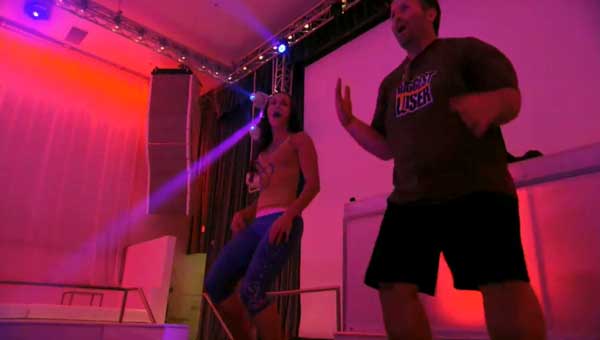 The Biggest Loser is on a roll! Last night’s episode was super enjoyable. There was relatively little crazy drama (besides that Chris/Antone thing, which ended up actually doing more good than harm), and so much of it was fun!

There were two cool challenges. The first benefited Feeding America, and the second involved a cooking competition that had a total Supermarket Sweep/Top Chef feel to it, as the BL13 contestants raced through the grocery store with carts and later created healthy dishes for former contestants to judge. Then there were the unconventional workouts (well, unconventional for The Biggest Loser that is)! Dolvett took the group to a Zumba class where he seriously got his white-boy groove on, even declaring himself “Zumba-licious.” Oh, how we loved it. Then Bob took the ladies on a trail bike ride, proving to them that not only the gym can give you a good workout.

Oh, and let us not forget that Bob was dressed up like a ref-pirate-Where’s Waldo character (socks and all!) and spent most of the show getting Megan to motivate herself and realize that she can do it. After her getting that, she unfortunately fell below the yellow line and the group sent her home instead of Mark, who got a big goose egg on the scale. Whether it was an alliance or game play at work, it sucked to see her go after finally finding some confidence.

Want to see some of Buddy’s sweet Zumba moves? Of course you do! Check out the clip below…

Can’t see the video? Click here to see Buddy bust it down on the Zumba stage.