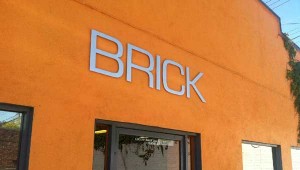 This is where Bob Harper works out, Brick CrossFit!

Why are you reading about dude-related stuff? Because it’s Fit Bottomed Dudes’ Week, that’s why! Click here for all the special posts, and please share with the guys in your life! This post is from Mark Arana, who is always up for a challenge—even if it includes trying workouts that kick Bob Harper’s butt!

Every “dude” wants a good workout, especially if you’re sacrificing sleeping in on a Saturday morning. At least that’s how I felt when I had to get up for a 10:45 a.m. Brick CrossFit workout in West Hollywood, Calif. Okay, I’ll be honest; I woke up at 8 a.m. because I was anxious to try this type of workout that is now considered the new hot trend in fitness. CrossFit workouts are everywhere, popping up in all the major cities across the country. They even have competitions that can be seen on ESPN. I needed a different routine. I was in a fitness rut and needed something to challenge me. CrossFit seemed like the way to go…

After stopping by for some fuel (aka coffee), my girlfriend and I finally made it to the gym. It’s tucked away in the corner of a small lot located on Santa Monica Boulevard. Did I mention that Brick is home to The Biggest Loser’s star trainer Bob Harper? The staff said he’s there every day working out. I did meet him a week before, and the CrossFit workouts look like they’re definitely paying off. He’s added more muscle to his physique and is stronger than ever. 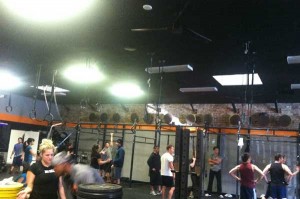 After settling down, I stood and watched other CrossFit members work it out. They were doing handstand push-ups, pull-ups, rows and other moves that drew hearts in my eyes; I could be in love. However, I didn’t know if I was going to be able to keep up. From hearing about it from other friends, all I knew was that it was intense. I felt that my workouts were not good enough to hang with these CrossFit gurus. I was told that I would be participating in the beginner CrossFit workout. This helped my nerves settle down a bit. As we got started, JP and Mosir, our trainers, sat us down and told us a little about what we could expect. The one thing that stuck with me was that CrossFit is not for those who compete against each other. The workouts are for you to compete against yourself. Not everyone will be as strong or have the same endurance. So, the most important rule is pushing yourself to what you’re capable of doing.

At Brick CrossFit, you rarely repeat a workout. Every day a new challenging routine (Workout of the Day or WOD) has been developed by a trainer and is written on “The Board,” a big white dry erase board. The workout we did consisted of a four-minute jump rope warm-up, active stretching and a two-part WOD. The active stretching felt like a workout in and of itself. We did lunges across the room, squats while pushing our knees out with our elbows, and inch worms to help stretch our hamstrings.

After the hardest warm-up ever, we got busy. We started with a Tabata workout, consisting of 20 seconds of full effort with only 10 seconds to rest, which was repeated for eight rounds. We did air squats and alternated with push-ups every other round. As we got through each round, my arms and quads were shaking. With CrossFit, everything has to be performed correctly. JP explained that with correct form and body alignment, you maximize your workout with efficiency. This is why I was terribly pooped by the eighth round. I just kept reminding myself that I was here to challenge myself and no one else. 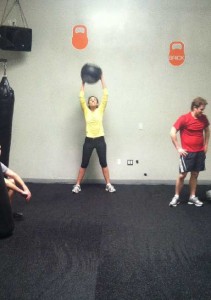 The next part of the workout included four rounds of six wall balls, six ball slams and six burpees—with no breaks in between. Okay, this is what I was having nightmares about. These three moves all consist of endurance that works the major muscle groups.  When performing the wall ball, you grab a heavy 12-pound weighted ball, squat as low as you can and then stand up tossing the ball against the wall. When performing ball slams, you grab the same 12-pound ball and slam the ball to the floor as hard you can. And when performing burpees, you squat down to the floor, kick your legs out, bring your chest to the floor, then bring your knees back into to your chest, stand up and jump while clapping your hands over your head.

These three moves were a deadly combination. During it, all I could think of was “six, six, six.” It’s probably not the best three numbers to repeat to yourself, but it’s what got me through. FINALLY, after four rounds of those deadly moves, I was done. I hadn’t felt so good about a workout in such a long time.

I may have had hearts in my eyes when I first walked into Brick CrossFit, but after that workout, I was definitely in love—and now want a committed relationship with CrossFit. I was always a skeptic when I heard about CrossFit, but after experiencing this muscle-wrenching program and  listening to JP and Mosir talk about the other hard-core programs BRICK offers, I know I’m going to be back. —Mark Arana