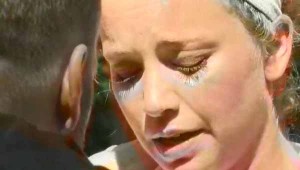 Cue the dramatic music. This week on The Biggest Loser, the former contestants returned, ready to weigh-in and fight for a spot in the finale. After all of the drama last week about the past contestants returning to the ranch, I kind of expected this episode to be bananas. But, alas, it was pretty tame.

First, all of the past contestants weighed in. It was SO awesome to see all of them, and most were looking great and still keeping up with their new healthy lifestyles (it was like a warm-up for the finale, really!). The eight past contestants with the highest percentage of weight lost then moved on to a three-part challenge with Jeremy. While Conda and Kim have their spots solidified in the finale, Jeremy had to fight for his spot. And fight he did. After a 100-yard dash, calorie puzzle and balance/endurance challenge, he somehow pulled it out, beating Lauren and Mike. I pretty much credit Dolvett for Jeremy winning—he gave him quite the pep talk in the gym, as Jeremy had been really down (and pretty whiny, really) about losing the weigh-in last week.

Because I really, really wanted Emily to make it back on the show (darn!), I’m choosing to share a clip of her rocking burpees in Bob’s makeshift CrossFit gym on the ranch. Freaking 68 burpees is no joke…

Can you believe that next week is already the finale? Who are you most excited to see? Ready to put an end to this season? Tell us all about it! —Jenn