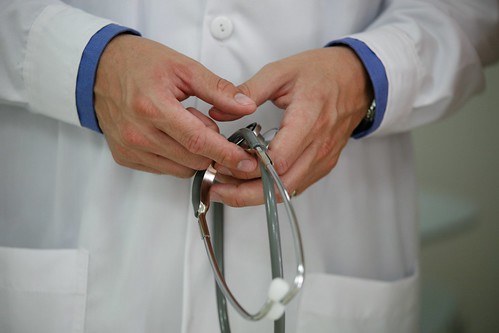 We’re dedicating this entire week of posts to National Infertility Awareness Week, a nationwide campaign intended to educate the public about infertility and the concerns of the infertility community.


Trying to get pregnant month after month is not fun for anyone. And after a few months of getting busy yet failing to see that positive pregnancy test, it’s only human to start wondering what could be preventing that egg from meeting up with that sperm. Today, Dr. Jane Frederick, a reproductive endocrinologist at HRC Fertility, shares two common fertility issues that women may be facing. The good news? They won’t necessarily prevent you from getting pregnant. —Erin

Polycystic ovarian syndrome, known commonly as PCOS, refers to a hormone disorder affecting 3 to 10 percent of reproductive-aged women. Considered a leading cause of female infertility, PCOS reduces the ability of the ovaries to mature and release eggs into the uterus. Other reproductive symptoms of PCOS include the creation of polycystic ovaries, characterized by multiple cysts and small follicles; chronic anovulation, or an inability to ovulate; and hormonal imbalance, including high levels of the male hormone androgen.

Management of PCOS requires a treatment program focused on four individual areas: encouraging fertility; restoring regular menstrual cycles while preventing disorders of the endometrium (uterine lining); treating the symptoms of acne and abnormal hair growth; and lowering insulin levels. Research shows that diet and exercise can go far in reducing the obesity associated with PCOS and, as a result, restore normal ovulation and menstruation cycles.

Infertility specialists typically treat hormonal symptoms, in particular the excessive level of androgen, by prescribing low-dose oral contraceptives to reduce the acne and hair growth. To increase fertility, PCOS patients can undergo a number of conservative treatments, such as fertility drugs like Clomid to help ovulation and achieve a successful pregnancy. The important message is that PCOS is a very treatable disorder, and women should seek out the infertility specialist for help in the diagnosis and treatment.

Endometriosis is the often-undetected cause of infertility. This condition is the abnormal growth of cells (endometrial cells) similar to those that form inside of the uterus, but in a location outside of the uterus. Endometriosis is most commonly found on other organs of the pelvis. The exact cause of endometriosis has not been identified. It is more common in women who are experiencing infertility than in fertile women, but the condition does not fully prevent conception.

Most women with endometriosis have no symptoms, in which case therapy is neither appropriate nor necessary. Pelvic pain during menstruation or ovulation can be a symptom of endometriosis, but may also occur in normal women. Endometriosis can be suspected based on the woman’s pattern of symptoms, and sometimes during a physical examination, but the definite diagnosis is confirmed by surgery, usually laparoscopy. Treatment of endometriosis includes medication and surgery for both pain relief and treatment of infertility if pregnancy is desired.

Is anyone dealing with these issues? Gotten pregnant anyways? Share your successes below! —Erin